Michael Bell teaches at Carleton University. He has been four times a Canadian ambassador in the Middle East.

Michael Bell teaches at Carleton University. He has been four times a Canadian ambassador in the Middle East.Despite the chaos pervasive in the Middle East, the position of Israeli Prime Minister Benjamin Netanyahu and his right-wing partners has never been stronger. Iran aside, he has much reason to be satisfied. The integration of the West Bank into Israel, the key ambition of the Prime Minister's coalition, is unimpeded.

Within Israel there are few real challenges to his rule. Centrists and leftists, who almost carried the day under the leadership of Ehud Barak and Ehud Olmert, have become distinct minorities. The Labour Party is a shadow of its former self; the peace camp seems on its last legs.

The Palestinian Authority under Mahmoud Abbas is powerless. Hundreds of new housing starts are slated for the West Bank and the security barrier is to be expanded. There is nothing the PA, Fatah, or Hamas can do, although Palestinian radicals have the ability to disrupt the lives of Israeli citizens, as they continue to do in the so-called "intifada of the knives." Scheduled Palestinian municipal elections have been "postponed," allegedly because of Hamas/Fatah rivalry. Soundings when the campaign was in full swing suggested that voters were likely to support village and tribal candidates, focusing on local issues, rather than Palestinian nationalism whose leadership is regarded as ineffective and corrupt.

Despite persistent criticism by U.S. administrations, particularly that of President Barack Obama, the Israeli-U.S. relationship has not been weakened. The situation would be more favourable for Mr. Netanyahu with Hillary Clinton. Earlier this month, an agreement was signed between the Obama administration and Israel committing the United States to delivering $38-billion (U.S.) in military aid. This is reinforced by far-reaching intelligence and security co-operation. It is buttressed by tax-deductible donations from wealthy Americans and well-endowed foundations aimed at expanding the Israeli presence in the West Bank.

Criticism by the European Union of Israeli practices has achieved little. For Mr. Netanyahu, these unwelcome irritants can be handled with relative ease. EU pressure, such as it is, is balanced by warming relations between Israel and Russia, despite Moscow's self-serving motives. Much the same applies to Sunni Turkey, where diplomatic relations with Israel have been restored.

An increasingly critical factor affecting Israel's well-being is the changing nature of Arab politics. Sunni state strategies have changed dramatically since the 2003 U.S.-led invasion of Iraq, the failed Arab Spring and the rise of jihadi radicalism. The role of extremist non-state actors and Shia leaders in the Arab world has been fuelled and funded by Iranian ambition. The ruling Sunni elites consequently see Israel as an ally with shared geopolitical interests and a common sense of vulnerability.

In Saudi Arabia, such views have been particularly noteworthy since the advent of King Salman and Prince Mohammed bin Nayef in 2015. They see Iran as a lethal threat. They are taking demonstrable action, inter alia, with their involvement in the Yemeni civil war. Quiet but long-standing security co-operation between Saudis and Israelis has been strengthened. Publicized meetings between retired members of the Saudi power elite (done at the behest of the regime in Riyadh) and senior Israelis are increasingly the norm. Israel is no longer taboo.

While the Saudis and other Sunni Arab states formally call for a two-state solution to the Israel/Palestinian dilemma, this is not much more than window dressing. Grand geostrategic concerns outweigh old nationalist preoccupations. The only red line for the Saudis concerning Palestine is the Sacred Esplanade in Jerusalem, which they view as inviolable, as does the Arab world as a whole, something Mr. Netanyahu fully recognizes.

Like other Sunni states, Egypt feels threatened by Hamas in Gaza and radical Islamists, particularly in the Sinai. This again mirrors Israeli concerns.

Same thing goes in Jordan, a long-time de facto ally of Israel. King Abdullah's domestic radicals threaten the regime, and the influx of Syrian refugees breeds instability. Israel has every interest in a stable and predictable border. For Jordan, Israel is a strategic and welcome guarantor.

That said, Hezbollah remains a threat and Israel is still greeted with intense hostility on the Arab street. This may never change. Much rhetoric spreads virulent anti-Israeli and anti-Jewish propaganda, although some journalists in Saudi Arabia are softening their tone, with the regime's blessing.

These developments are bad news for proponents of a viable Palestinian state, an option rapidly losing ground. But they strengthen Mr. Netanyahu's ability to shift the demographic balance on the West Bank. He can act with the knowledge that, while a difficult road may lie ahead, his agenda is built on solid ground.

Editor's Note: A Friday Opinion column on Israel incorrectly said some 1,000 new Israeli settlements are slated for the West Bank. In fact, hundreds of new housing starts are slated. 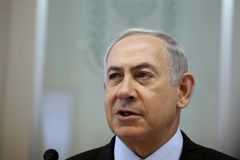