The following is adapted from Supreme Court Justice Rosalie Abella's commencement speech to Brandeis University graduates on May 22:

You see before you a Justice of the Supreme Court of Canada who is deeply worried about the state of justice in the world. I was born right after the Second World War. That was the devastating war that inspired the nations of the world to unite in democratic solidarity and commit themselves conceptually, aspirationally, institutionally and legally to the promotion and protection of values designed to prevent a repetition of the war's unimaginable human rights abuses.

Yet here we are in 2017, barely seven decades later, watching "never again" turn into "again and again," and watching that wonderful democratic consensus fragment, shattered by narcissistic populism, an unhealthy tolerance for intolerance, a cavalier indifference to equality, a deliberate amnesia about the instruments and values of democracy that are no less crucial than elections, and a shocking disrespect for the borders between power and its independent adjudicators like the press and the courts.

It is time to remind ourselves why we developed such a passionate and, we thought, unshakeable commitment to democracy and human rights, to remember the three lessons we were supposed to have learned from the concentration camps of Europe: Indifference is injustice's incubator; it's not just what you stand for, it's what you stand up for; and we can never forget how the world looks to those who are vulnerable.

Two hundred thousand European Jews survived the Holocaust. Three of them were my parents and grandmother. My mother's family manufactured roofing materials. My father graduated with a master's in law from the Jagiellonian law school in Krakow. My parents spent three years in concentration camps. Their two-year-old son, my brother, and my father's parents and three younger brothers were all killed at Treblinka. My father was the only person in his family to survive the war. He was 35 when the war ended. My mother was 28. As I reached each of those ages, I tried to imagine how they felt facing an unknown future as survivors of an unimaginable past. And as each of our two sons reached the age my brother had been when he was killed, I tried to imagine my parents' pain at losing a two-year-old child, and I couldn't.

After the war, my parents went to Stuttgart, Germany, where the Americans hired my father, who taught himself English, to help set up the system of legal services for displaced persons in the Allied zone in southwest Germany. In an act that seems to me to be almost incomprehensible in its breathtaking optimism, my parents and thousands of other survivors transcended the inhumanity they had experienced and decided to have more children. I think it was a way to fix their hearts and to prove to themselves and the world that their spirits were not broken. I was born in Stuttgart on July 1, 1946, 30 years after Louis Brandeis was appointed to the Supreme Court, and my sister two years later.

My father, who was the head of our displaced persons camp, applied to emigrate to Canada, but was refused because his legal training wasn't considered a useful skill. He eventually was permitted entry as a tailor's cutter and as a shepherd. Within days of arriving in Toronto, my father went to the Law Society to ask what tests he would need to take to become lawyer. "None," they said. Non-citizens could not be lawyers. Waiting the five years it took in those days to become a citizen was impossible. There was a family to feed. So he became an insurance agent for the next 20 years, happily. I never heard him complain.

The moment I heard that story as a child about my father not being able to be a lawyer was the moment I decided to become one. I was four. I had no idea what being a lawyer meant, but I did have an idea that I wanted to carry on what I thought he was unfairly prevented from doing. My father died a month before I graduated from law school, and he never lived to see his inspiration take flight in the daughter he raised to fear only injustice, indifference and cowardice, or in his two grandsons, both of whom became lawyers. And he never had a chance to see the marriage he had exuberantly celebrated with me the year before he died flourish into a miraculously joyful partnership with one of Canada's most brilliant historians.

But my mother did, and carried me proudly into the future on the shoulders of her unwavering confidence for the next 40 years, until she died in 2010. This extraordinary honour [of an honorary degree] from Brandeis is for me above all a tribute to her unwavering resilience, inspiration and courage.

A few years ago, she gave me some of my father's papers from Germany that I'd never seen before. In those papers I found the answer to why he always spoke so respectfully and appreciatively of Americans. I saw letters from American lawyers, prosecutors and judges he had worked with in the U.S. zone in Stuttgart. They were warm, compassionate and encouraging letters, either recommending, appointing or qualifying my father for various legal roles in the court system the Americans had set up in Germany after the war. These Americans believed in him, and as a result they not only restored him, they gave him back his belief that justice was possible.

I found one of the letters written to him by an American lawyer in 1947 to be particularly poignant. It said, "Under extreme difficulties, you contributed your share in helping to make life bearable for your friends, co-nationals, and those of other nationalities. It is hard to be a refugee, and it is twice as hard to be a refugee and a lawyer. You were battered, but you did not allow yourself to be beaten. You continued to fight for your human rights and for those of your fellows in fate, like brave fighters for a new society."

And here I am 70 years later, a member of that new society he fought and hoped for, and the beneficiary of generosity and opportunities he would never have dreamed possible, including, amazingly, an honorary degree from Brandeis, a university he venerated, and all because the phoenix that rose from the ashes of Auschwitz was justice – beautiful, democratic, tolerant, compassionate justice.

My life started in a country where there had been no democracy, no rights, no justice and all because we were Jewish. No one with this history does not feel lucky to be alive and free. No one with this history takes anything for granted, and no one with this history does not feel that we have a particular duty to wear our identities with pride and to promise our children that we will do everything humanly possible to keep the world safer for them than it was for their grandparents, a world where all children – regardless of race, colour, religion, or gender – can wear their identities with dignity, with pride and in peace.

Opinion
Want to survive another 100 days of Trump? Don’t get complacent
May 1, 2017
Opinion
Fragility and discontent: We can only hope history isn’t repeating itself
April 5, 2017
Opinion
Elie Wiesel: A global symbol of dignity and righteousness
May 16, 2018 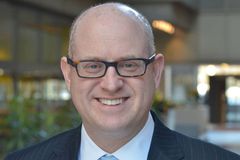