David Landry is a Ph.D. candidate at the Johns Hopkins University School of Advanced International Studies, where he researches the links between foreign direct investment inflows and governance in sub-Saharan Africa. He has consulted for the World Bank and Transparency International. Brian Klaas is a Clarendon Scholar and researcher at the University of Oxford focusing on elections, democratic transitions, and political violence. He has recently advised the International Crisis Group and the Carter Center in sub-Saharan Africa.

Nigerians go to the polls Saturday to decide whether President Goodluck Jonathan deserves re-election. The vote may be disrupted by violence, as Boko Haram has warned of attacks.

In 2014, the radical Islamist militia killed almost 10,000 people in Nigeria, mirroring the Islamic State's toll in Syria and Iraq. In January, they added to that macabre tally by burning the town of Baga to the ground, with reported casualties ranging from several hundred to upward of 2,000.

Shockingly, it appears that Boko Haram's ability to execute grisly massacres is something that incumbent Mr. Jonathan has been exploiting for political gain. It is a strategy that may now backfire and cost him re-election.

But as shown by its recent pledge of allegiance to Islamic State, Boko Haram is not only Nigeria's problem; it represents a threat to West African and international security. In recent weeks, the group conducted attacks not only in Nigeria but also across the border into Chad, Niger, and Cameroon. For months, the movement has metastasized, virtually unchecked by a Nigerian regime more concerned about winning votes than protecting its citizens.

Why has Boko Haram been able to spread so easily in this West African state of 175 million people? The answer lies partly in military incompetence, but mostly in political cynicism.

Last year, the militants grabbed international headlines for abducting 276 Nigerian girls from their school. The high-profile "Bring Back Our Girls" campaign has since faded away quietly even though 219 girls are still unaccounted for. (Fortunately, several dozen of the students escaped).

When the girls were kidnapped, rapid intelligence-gathering could have helped find the girls quickly. Nigeria purchased Israeli drones in 2006, so they were well-equipped for the search. But the drones, despite being less than a decade old, had been allowed to fall into disrepair. They were apparently never flown, even though the government spent approximately $250-million (U.S.) to purchase them.

Without the drones, the call for international assistance came too late. The girls were not located even when international search teams and their functioning drones arrived a month after the kidnapping.

Nigeria's politicians painted a deceptively rosy picture of these mishaps. "The good news for the parents of the girls is that we know where they are, but we cannot tell you," Air Marshal Alex Sabundu Badeh, the government's chief of defence staff, said last May. This was simply untrue.

Last October, the government claimed it had negotiated a ceasefire with Boko Haram and was discussing the final terms for the return of the remaining missing girls. Again, this was false.

This seeming incompetence does not explain why amateur militants have proved to be too much of a match for Nigeria's military, a well-equipped force that boasts roughly 162,000 active-duty personnel. Instead, it now seems likely that Nigeria's failure to destroy Boko Haram may have been a deliberate political strategy to win re-election.

Last November, the United States refused to sell Cobra attack helicopters to Nigeria because of concerns "about Nigeria's ability to use and maintain" them and its track record of excessive civilian casualties during combat operations. In retaliation, Nigeria's government ended a crucial program that saw the U.S. military training Nigeria's army in counterinsurgency tactics to better fight Boko Haram.

In some clear-cut ways, having the conflict rage on in northeastern Nigeria has made Mr. Jonathan's re-election more likely. As Omolade Adunbi, a professor of African studies at the University of Michigan recently explained, "Jonathan didn't take the fight against Boko Haram seriously because the area was controlled by the opposition party."

People who fled their homes in these opposition areas are legally unable to vote anywhere else, meaning that more than one million votes that would have gone overwhelmingly for the opposition candidate may go uncast.

Under these circumstances, the election was slated for late February. Shortly before election day, however, it became clear that the government's electoral strategy was backfiring. Polls showed that even longtime supporters worried about the government's inability to provide protection against Boko Haram.

The election was postponed under the official pretense that the security climate was not conducive to an election. With the postponement, a change occurred almost instantly. Nigeria's government suddenly began to win battle after battle against Boko Haram.

On Friday – the day before the election – the Nigerian government boasted that its forces had retaken Boko Haram's headquarters in the northeastern town of Gwoza. It could be a coincidence, but what are the odds that this decisive blow happened to fall immediately before Nigeria votes?

Instead, the sudden shift exposes the newfound political necessity of showing progress against Boko Haram, simply to improve the ruling regime's image as it heads into a contentious election that it may lose.

In late February, Chadian troops overran a Boko Haram cell in Nigeria. They wanted to continue their offensive, but the Nigerian government refused to let them do so. The Nigerian government's reaction to Chadian assistance, which halted their progress, reflected its priorities. "We turned back because Nigeria did not authorize us to go any further," Chadian Army Colonel Azem Bermandoa said then.

After the political dust from this election has cleared, Western governments have a role to play in helping destroy Boko Haram. Canada and the United States already train soldiers in the region. There is more room for Western logistical support to help in the fight against Boko Haram.

Western governments, however, cannot bolster global security without willing partners. Canada and its Western allies can most effectively help destroy Boko Haram by pressuring the newly elected Nigerian government to stop playing politics and starts taking this fight, and the safety of its citizens, seriously. 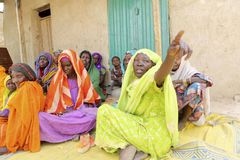