In the past two decades, while global trade expanded rapidly against the backdrop of the emergence of large economies such as China, Brazil, and India, the North American economy became much more integrated, becoming the most globally competitive region according to the World Economic Forum, and confirming the IMF's suggestion that "Open Regionalism" offers a propitious mechanism for liberalizing global trade.

As Prime Minister Stephen Harper, U.S. President Barack Obama, and President Enrique Pena Nieto of Mexico wrapped up the latest "Three Amigos" summit, questions regarding how to successfully bolster already integrated modes of production and markets in the face of global competition were subdued at best.

Our three national leaders had a prime opportunity on Wednesday to move forward on crucial continental issues such as climate, immigration, energy, health, food, innovation and education. They chose to ignore it.

North Americans know that the region must ensure that its manufacturing, services, agricultural, and energy sectors maintain and enhance continental competitiveness. As has been pointed out many times in the media attention ahead of the summit, our three countries do not just trade with each other, they make things together. This is a fact that has even prompted calls for a "made-in-North-America" labelling strategy.

Making things together means sending parts and components across borders during the manufacturing process in order to benefit both from particular comparative advantages offered by each country and from economies of scale. Integrated production chains have become a basic business strategy in the region, but one that remains primarily business-driven and supported by local rather than national political constituencies.

Twenty years ago, the private sector played a crucial role convincing citizens in the three NAFTA countries of the benefits of a regional free-trade agreement. Business identified NAFTA as great opportunity and vigorously defended the deal from politically-charged voices warning of an influx of cheap labour and goods, exploitative practices, and loss of cultural independence. Today, commercial operations recognize the availability of diverse sources of capital and labour as an advantage; integrated production processes boost productivity and provide jobs; and CanLit and the Mexican film industry are thriving. And, as has been repeated many times in the run-up to this meeting, Canada, the U.S., and Mexico are huge investors in each other and have watched trade in North America roughly triple over the past 20 years. Against this backdrop, it is unsurprising that sizeable majorities of the population in all three countries support further efforts to bolster free trade in North America, according to a recent U.S. poll. Investment drives innovation, and the production of goods and services that are key drivers of growth and employment on the continent.

In the wake of Wednesday night's Three Amigos meeting, it is worth noting that while the North American market and supporting production systems have grown dramatically in scale, the role of civil society has also emerged as a much more significant force than it was 20 years ago. Today, an important role exists for research institutes, NGOs, and universities to work with business and governments. And today the region faces challenges that know no borders. Among these, the burgeoning threats of climate change, food security, and health loom particularly large. At the same time, shared research agendas and innovation between three such complementary partners – a large, rapidly emerging power, an established middle power, and a global powerhouse – offer untold opportunities for the wealth-creation possibilities that politically-legitimate solutions to great challenges will offer.

Other challenges – perhaps less lofty but certainly fundamentally important for long-term prosperity – include improvement of basic infrastructures across North American transportation networks and harmonization of regulatory regimes. In referring to these challenges, Mr. Obama is correct to point out that civil society actors offer a practical, on-the-ground presence. There is certainly room for increased collaboration among groups in each of the three countries for addressing both global challenges and bureaucratic hurdles. But, civil society needs empowerment by political processes to accomplish big goals shackled by parochial considerations, not hindrance.

The benefits of "doubling-down" on North America go far beyond trade. Local constituencies and civil society understand the imperatives of the issues and, in the face of a political vacuum on North America, will simply have to up their game.

Jennifer Jeffs is president of the Canadian International Council.

Opinion
What the 3 Amigos should really talk about today: monarch butterflies
February 19, 2014 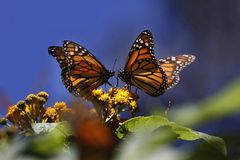 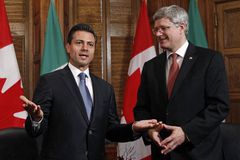