Now that Zeid Ra'ad al-Hussein, the UN High Commissioner for Human Rights, has declared the oppression of Myanmar's Rohingya ethnic minority "ethnic cleansing," the UN's official Responsibility to Protect mechanism should be triggered to save Rohingya from continued persecution and death. World order must not dither.

Since what is happening in Myanmar has been designated as "ethnic cleansing," that means that the situation in Myanmar verges on genocide. Bangladesh's foreign minister has already called the massacre of Rohingya "genocide." The prime task of humanitarian forces is to act now to save the lives and well-being of millions of underprivileged persons. Nothing is more urgent.

If the Responsibility to Protect norm (adopted by the UN General Assembly in 2005 and formulated in Canada in 1998) has any content and power, the UN Security Council should now authorize a sizable Chapter VII peacekeeping force to intervene in Myanmar to secure the continued existence of the Rohingya inside Myanmar.

Globe in Bangladesh: Rohingya left with 'nothing' as soldiers lay waste to their homes

Explainer: Who are the Rohingya and why are they fleeing Myanmar?

Canada and other like-minded countries – the middle powers of the world respected for their principled stands regarding matters of human rights – need to lead this effort to halt Myanmar's oppression of its own people. In addition to necessary resolutions in the UN and the mounting of a Chapter VII effort, Canada, the Nordics, the Dutch and so on need loudly to call Myanmar's shameful discriminatory actions what they are. They should denounce the actions of the Myanmar government. Trade sanctions and other forms of shunning Myanmar would also help, even if China vetoed such resolutions in the Security Council.

Rohingya constitute about 1.1 million of the total 53 million population of Myanmar (once Burma) and have lived in the northern section of Rakhine State, bordering southeastern Bangladesh, since at least the 18th century. But Myanmar denies Rohingya citizenship or recognition as an ethnic group, claiming that they are Bangladeshis and illegal immigrants. Nearly 400,000 Rohingyas have fled Myanmar's military attacks since July, crossing under desperate conditions into already densely populated Bangladesh. Hundreds of Rohingya settlements in Rakhine State have been torched. At least 3,000 Rohingya have been killed, thousands raped and more than 140,000 forced into concentration camps thanks to Myanmar's security actions.

Myanmar denies burning Rohingya villages or oppressing its (non-)citizens. Aung San Suu Kyi, the effective democratic leader of Myanmar, Nobel laureate and long-time prisoner of the Myanmar military regime from 1990 to 2010, refuses to acknowledge the suffering of the Rohingya. Her denial of their human rights has been criticized by the Dalai Lama, a fellow Nobel Peace Prize winner, and by additional Nobel laureates including Archbishop Desmond Tutu of South Africa. Mr. Tutu has urged Ms. Suu Kyi to abandon political calculations (she may fear offending Buddhist Burmans, her country's majority) and to speak out for human rights.

Despite the Dalai Lama's pleas to succour the Rohingya, the oppression of Rohingya has long been fuelled by Buddhist monks and Buddhist populism. Unlike 90 per cent of all Burmese (Buddhist Burmans and non-Burman ethnicities, some of whom are Christian), the Rohingya are Muslims, and dark-skinned. Both their form of worship and their colour single them out. Yet, discriminated against as they have been for decades, if not centuries, the Rohingya have lived in Rakhine State and elsewhere in Myanmar for long periods without triggering the kinds of ethnic-cleansing efforts that they have experienced this spring and summer. In recent years, too, many have been compelled by state-sponsored programs to take to the sea in ships, some seeking asylum in Thailand and Malaysia.

Ms. Suu Kyi was a Nelson Mandela-like icon, having emerged from incarceration in 2010 to lead what is now the dominant political party in Myanmar. The military still control 25 per cent of the seats in Myanmar's parliament, however, and also hold key security ministries. Thus, Ms. Suu Kyi cannot simply override the military. But she can speak out forcefully, and has not.

The mounting of a Chapter VII peacekeeping mission, and the shaming of her silence by Canada and other respectful nations, plus trade sanctions, could make it clear that world order will not permit its defenceless members to be butchered, made homeless and ethnically cleansed. 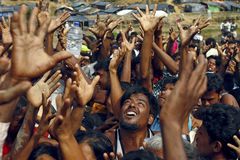