There is an unfolding health-care crisis in Ontario that requires serious action. The problem is felt acutely during cold and flu season.

We have each seen the signs in recent years, and heard the stories: surgeries cancelled at the last minute due to a patient backlog; elderly loved ones kept on gurneys in hallways for hours or even days; ER wards choked with patients waiting for care. Even Ottawa's Children's Hospital of Eastern Ontario recently warned families about waiting times to treat children in the emergency department.

In the past several months, data have confirmed just how dire the problem has become. Every day, roughly 3,000 beds in Ontario – 16 per cent of the total – are filled by patients not requiring urgent care, but for whom there is no bed in the overloaded rehab or long-term care systems where they would otherwise belong.

This year, provincial ER waiting times set a record of longest in history. And new numbers released by the Ontario Hospital Association revealed the grim top-line figure: during the summer of 2017 – a slow season for hospital admissions – fully half of our hospitals were operating at or above 100-per-cent capacity. One facility hit an astonishing 140 per cent.

This was no fluke. The health-care system is now so thinly stretched that even the demands of routine medical care are beyond our capability. Our doctors and nurses are utterly devoted to the job of keeping patients safe and making them well. But there is only so much they can do when patients are lined up in corridors waiting for a proper room.

My colleagues in the health-care system tell me that the accepted international standard for hospital capacity is 85 per cent – enough beds to take care of all routine cases with a small number left over to deal with emergencies. If occupancy goes higher than 85 per cent, the risk of hospital-acquired infections, the focus of my company's efforts, climbs steadily.

Something must be done. Indeed, the Ontario government recently announced some measures, including some that will be immediately useful in the GTA. This fall, two decommissioned hospitals were put back into partial use. The facilities, deemed surplus years ago but not yet sold off, are not operating as full hospitals, but have added hundreds of beds to the local network, specifically for patients waiting for a bed in a long-term-care home or rehab facility. This will help, especially since one of the reactivated facilities will include 50 beds devoted to mental-health patients – vital at this time of the year when some of our city's most vulnerable residents face extreme cold and overcrowded shelters. It was for precisely this reason that Toronto recently announced an additional 400 shelter beds.

But this isn't a permanent solution: The staff to operate the two facilities were drawn from other hospitals in the region and a not-for-profit home-care agency. The extra beds help, but we can only ask so much of medical practitioners before they burn out.

Along with the reactivated hospitals came promises of more funding, enough to open 1,200 more beds across the province. An additional $40-million has been pledged for helping patients stay at home longer before entering a care facility, or return there once out of any danger.

But not all of the funding was permanent. And there are only so many mothballed hospitals around waiting to be returned to operation. No one, least of all the political leaders about to run a provincial election, want to face this reality. But the numbers are clear: Our health-care system is simply too lean. Ontario needs more hospitals, more rehab facilities and more long-term-care beds. We need health-care professionals to staff all these new sites, plus ease shortages at the ones we already have. This will mean money.

Health care is already the biggest budgetary expenditure in Ontario and given the province's challenging fiscal situation, enthusiasm for new large expenditures will be limited. But we can't deny reality. Our system now struggles to provide even routine care. If there is any issue that needs serious attention from all parties ahead of the spring election, this is it.

Jon Dwyer is managing director of Aereus Technologies & Interspec Systems, and a member of the City of Toronto innovation economy advisory council.

How one Toronto hospital is coming back to life to bring relief to five more
December 8, 2017 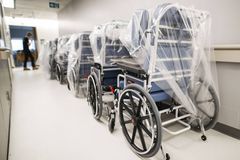 Hospital overcrowding has become the norm in Ontario, figures show
May 21, 2017
Ontario to reopen two hospitals in bid to ease overcrowding
October 23, 2017