John Barrett is president and CEO of the Canadian Nuclear Association

The deal is done on COP21 in Paris. Now the work begins. How can the world reach the goal agreed in Paris to limit global warming to well below 2 degrees C?

Canada can help in a number of ways.

First, any plan for low-carbon investments must keep all options open and all low-carbon technologies under consideration.

According to the Intergovernmental Panel on Climate Change (IPCC), low-carbon sources by 2050 must provide 80 per cent of global electricity, up from 30 per cent today, in order to hold back climate change. During the same period, global demand for electricity will double if the basic needs of humanity are to be met. The world therefore needs the full range of low-carbon energy options available today – renewables, nuclear, and fossil fuels with carbon capture and sequestration.

Second, it is time to recognize the contribution – current and potential – of nuclear power in curbing greenhouse gas (GHG) emissions worldwide. Nuclear energy is already proven to be effective and implementable on a large scale. Today it provides 11 per cent of global electricity and 16 per cent of electricity in Canada.

The International Energy Agency has calculated that, since 1971, nuclear energy has avoided 56 gigatonnes (Gt) of GHG emissions – equal to nearly two years of global emissions. Accordingly, the pathways with the greatest probability for successfully decarbonizing energy systems require the use of nuclear energy.

Third, in tackling the challenge of climate change, why favour one low-carbon technology over another? Last year, for example, nuclear provided 62 per cent of grid-delivered power in Ontario; hydro 24 per cent; and wind 4 per cent (solar was negligible). This nuclear foundation enables solar and wind technologies to integrate progressively into the electricity system. The result: 90 per cent clean electricity for Ontarians. Ontario thus provides an excellent model of how a mix of low-carbon energy technologies can provide secure energy supply for a modern economy.

Fourth, Canadian uranium provides the fuel for dozens of nuclear power plants worldwide, while Canadian nuclear technology in the form of CANDU reactors is currently in seven countries (and that number could expand). Consider how many more gigatonnes of CO2 emissions have been avoided globally over the years, thanks to the use of Canada's uranium and technology. This is a real contribution to mitigating climate change and an offset to our national oil and gas emissions. We should recognize it in our climate-change policies.

Fifth, while in Paris at COP21, Prime Minister Justin Trudeau pledged increased federal funding of research and innovation in low-carbon, clean technologies. But how will this funding be distributed? To help guide such funding, especially in the light of a new National Energy Strategy, the federal government could create a Climate Change Innovation Council.

For its part, the nuclear industry is working with the Ontario government towards the creation of a Nuclear Innovation Council, which would have the similar objective of guiding funding and projects. It would directly support the broader Climate Change Innovation Council at the federal level.

In Canada, we have considerable infrastructure and facilities to carry out advanced R&D and innovation in clean energy and commercial spinoffs. Opening these facilities for international collaboration under the auspices of the Climate Change Innovation Council would bring scientists from around the world to research together the technologies needed to stabilize the climate.

Such an initiative would provide real evidence that Canada is ready to play an international leadership role on climate change. It would be an initiative worthy of Canada's great history as an innovator of ideas that serve a global purpose beyond national interest alone.

Opinion
After Paris, here’s how Canada can achieve a low-carbon future
December 15, 2015 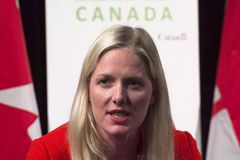