The last time I sang the national anthem was in November at a citizenship ceremony in Toronto, along with dozens of people who had just become Canadian. At that point, they would probably have sung Justin Bieber's Baby if you told them that it was the national anthem and it meant they could live in this excellent place. They probably wouldn't have sung My Heart Will Go On, though; there are only so many sacrifices you can make for your new homeland.

Having been invited to witness the ceremony, I can tell you it was profoundly moving (if you go to a citizenship ceremony, be sure to buy one of those giant, Costco-sized cry packs of tissue). I spoke to immigrants from China and Colombia and Iran, and each was thrilled to be there, finally and authentically Canuck.

Liberal MP Mauril Bélanger arrived at the House of Commons last month by ambulance to support Bill C-210, his private member's bill that would change the English-language lyrics of O Canada from "all thy sons command" to "all of us command." He lives with ALS, and had to use computer software to deliver his speech. He said that he believes Canadians are ready "to ensure that our national anthem reflects the nation and the people that we really are in this 21st century."

Pretty simple, you'd think. Pretty reasonable, too, a change of a couple of words that very few people ever sing, except on the rare occasions they're at a ball game or a graduation ceremony. But to certain historical essentialists – the ones who prefer things as they were more than a century ago, when my great-grandmothers were at home, voteless, cursing the butter churn – this smacks of "political correctness." Political correctness, of course, is just a more contemporary way of saying "stuff I don't like."

There is nothing immutable about the English-language lyrics of O Canada anyway. They change like Spinal Tap's drummers. Robert Stanley Weir's 1908 lyrics originally read "thou dost in us command," which was altered less than a decade later to "all our sons command," probably to stoke First World War patriotic fervour. It's a good thing some of Mr. Weir's other verses never caught on, or we'd be singing this: "O Canada! Beneath thy shining skies/ May stalwart sons and gentle maidens rise." May your gorge rise, more like.

In 1967, a parliamentary committee studying the anthem found that 45 different versions of the lyrics were sung around the country. That year, 365 new submissions for lyrics were received, including a bilingual set from a "Quebec housewife," as The Globe and Mail memorably recorded. Many of the lyrics were considered too off-colour and anti-American, which just proves that some things never change, and that trolls did not arrive with the Internet. The committee agreed that the melody of O Canada deserved official status but the lyrics "required further study," which may be the most Canadian equivocation ever (the anthem was officially adopted in 1980).

That firebrand feminist radical, Stephen Harper, even proposed changing the lyrics: In the Conservatives' 2010 Throne Speech, the idea was floated that "all of us" was better than some of us, but a great rending of garments was heard from the Conservative base (okay, a lot of e-mails), and the Tories backed down.

It's possible that what frightened the Conservatives last time – and the MPs who voted against Mr. Bélanger's bill this time – are the words "gender neutral." It is an infelicitous phrase, I'll give you that. No one would name a boat or a horse Gender Neutral. If it were me, I wouldn't say the changes make the anthem gender-neutral, I'd say they make it fair. Or just. Does that sound better?

Change is hard. I get that. I wish that the Silver Rail still existed in Toronto so I could get a cocktail that wasn't served in a mason jar. But the world doesn't turn on the axis of our personal desires. It does, ideally, embrace new realities.

For centuries, we women in this country have resigned ourselves to being invisible in the public sphere, to never seeing statues that looked like us in town squares or our faces on currency or our existence acknowledged in the national anthem.

Mr. Bélanger's bill is a little bit closer to seeing the light of day – or more properly, to being sung out loud. It passed second reading in the House of Commons this week, and will be studied by the heritage committee before receiving a third reading. Maybe, in a year or so, the little lyrics cards that are handed out at citizenship ceremonies will read, "in all of us command." That would make some of us very happy indeed. 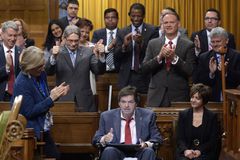 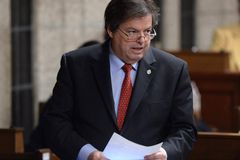