When the former U.S. president strode onstage at Toronto's convention centre on Friday to the strains of one of his old campaign songs – Stevie Wonder's Signed, Sealed, Delivered – his audience was primed for soaring rhetoric taking on a successor hugely unpopular north of the border.

Instead, the roughly 3,000 people who had ponied up for high-priced tickets were treated to a professorial and, at times, somewhat sleepy, hour-long session on long-term ways to advance progressive ideals in a rapidly changing world.

Not once, in either his opening remarks or a softball Q&A with former U.S. ambassador to Ottawa Bruce Heyman, did Mr. Obama mention Donald Trump by name. And, while he easily drew laughter and applause with the odd implicit shot – wryly noting that "a lot of strange forces" converged in last year's election, calling himself "old-fashioned" because "I believe in the Enlightenment, and reason and facts" – he seemed to be trying to keep those to a minimum as well.

Amid mounting racial and social strife within his country's borders, rising threat of nuclear conflict with North Korea, U.S. retreat from addressing climate change and a host of other issues that have other liberals fearing for the future, Mr. Obama was willing to temper only mildly what he described as his "congenital" optimism about his country's and the world's broad trajectory.

"I've often said that the arc of the moral universe bends toward justice, quoting Dr. [Martin Luther] King, but it doesn't do so on its own," he said at one point. "It requires those of us of good will to grab hold of that arc and pull it in the direction of justice. When we do so, then the trendlines for humanity are good."

It was a performance, at the invitation of the Liberal-aligned Canada 2020 think tank, that made for a stark contrast with one the previous night by the woman Mr. Obama had hoped would replace him in the White House. Coincidentally appearing in Toronto while on a book tour, Hillary Clinton fired up her crowd as she lambasted Mr. Trump and pronounced that "democracy is under attack."

Mr. Obama's inability or unwillingness to do the same, and the generally flat tone of his event, illustrated the awkward position in which he finds himself.

Although there is little doubt he shares Ms. Clinton's level of disdain for Mr. Trump, whose nationalist populism is diametrically opposed to his own internationalist liberalism, tradition dictates that former presidents refrain from sharp criticism of their successors. Although Mr. Trump has given him incentive to abandon that unwritten rule, including by breaking with the related one that incumbents be civil toward their predecessors, Mr. Obama has thus far felt compelled to stick with it.

But, as he takes to the speakers' circuit, raking in hundreds of thousands of dollars for paid appearances, Mr. Obama is also not a natural for the chummy charmfests favoured by Bill Clinton and George W. Bush. Friday's speech had few behind-the-scenes anecdotes from his time in office and little attempt at banter with Mr. Heyman.

That left Mr. Obama sharing thoughtful but not terribly pointed or fresh takes on the key tenets of a progressive agenda, going forward.

To address economic upheaval, primarily job losses and declining wages caused by automation, he called for "new social compacts … to give all of our young people the education that they need, to give workers the power to organize for better wages, to reform tax codes so that those who reap the most from a new economy can't avoid their obligations to the countries that made their success possible."

On climate change, he cited his experience helping persuade India's Prime Minister to embrace sustainable growth, to highlight that economic and environmental goals should be seen as aligned, not in conflict.

To combat political polarization, he said, progressives need "to train ourselves to listen to those with whom we disagree, to ultimately work to build bridges." And he mentioned immigration as an issue on which those who see it as an economic good need to address the concerns of those who believe it imperils their jobs, rather than brush them off.

Amid all this, at least one insight was somewhat surprising, given Mr. Obama's reputation for liking the policy weeds. There is too much inclination to keep studying the problems facing the world, he suggested, when many of the solutions are already obvious. "The problem is our human institutions aren't very good at implementing them."

He has ideas for how he might help rectify that. When it's fully up and running, he said, the Chicago-based Obama Foundation will work with other progressive organizations to empower social and political leaders of tomorrow. He intends to devote much of his life from this point on to that, he said, starting with a "young leaders'" summit next month.

Until that takes flight, events such as Friday's seem doomed to be vague in purpose, leaving admirers unfulfilled. He is still fresh enough from serving eight years in office that it is hard for him to speak aspirationally of policies he wants to see. And he is not far enough removed now, if he ever will be, to give his audiences the blistering critique of the incumbent they really want.

More women in politics is only way to get sexism out of politics: Hillary Clinton
September 28, 2017 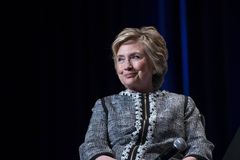 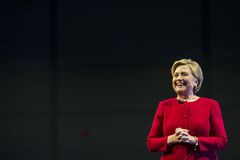 Trump eyes executive order on health-care, vows new vote in 2018
September 27, 2017
Follow Adam Radwanski on Twitter @aradwanski
Report an error Editorial code of conduct
Due to technical reasons, we have temporarily removed commenting from our articles. We hope to have this fixed soon. Thank you for your patience. If you are looking to give feedback on our new site, please send it along to feedback@globeandmail.com. If you want to write a letter to the editor, please forward to letters@globeandmail.com.
Comments