The West is dead, long live the West. Thus we might summarize the message of Barack Obama's trip to Europe so far - and his keynote speech in Westminster Hall. There was one rhetorical moment that only Mr. Obama could have produced. An eloquent passage about well-integrated diversity being a strength of both American and British society culminated in the observation that this is why "the grandson of a Kenyan who served as a cook in the British army" could now "stand before you as President of the United States." It earned the first and only spontaneous round of applause from the assembled British parliamentarians.

Yet most of this well-crafted speech could have been delivered by any American president over the last half-century: the references to Magna Carta and D-Day; the mythistory of a shared, centuries-old, English and American struggle for freedom; a hymn to NATO as "the most successful alliance in human history" (but only one passing reference to the EU); the obligatory quotation from Winston Churchill.

In Westminster, the President said that we - meaning America, Britain and the West more generally - "live in a global economy that is largely of our own making." Historically speaking, that is true. He also said that we "remain the greatest catalyst for global action." That may still be true, if one understands by that phrase, co-ordinated, co-operative global action. But it's also true that non-Western powers, acting by their own lights and in their own interests, are increasingly shaping the agenda of world politics. Beyond the important statement that the longing for freedom and human dignity is "not English, or American, or Western, it is universal," the Westminster speech said disappointingly little about this central development of our time.

Unless all current trends are reversed, the 21st century will see an increasingly post-Western world. China, India and Brazil will sooner or later be both more powerful and more important to the United States than Britain, France and Germany. The task for American and European statecraft is to build a revivified, somewhat enlarged old West - what I have called the post-West - into a larger framework of international order. It's a task for which Mr. Obama, who has half the United Nations in his own family, is particularly well suited. As I argued some years ago, our object must be to move from the definite to the indefinite article: from " the free world," meaning the Cold War West, toward the ideal of a free world.

That means lots of lovely limelight for France's Nicolas Sarkozy as he, too, strives to be re-elected as President, but otherwise is quite pointless. The G8 is an anachronistic survival of the old, Cold War West. It has its origins in meetings of finance ministers and national leaders of seven developed Western economies in the 1970s. Russia was added in the 1990s, at a time when the old man of Eurasia was supposed to be becoming part of an enlarged West. If the G8 did not exist today, no one would dream of inventing it. Its core business, the management of the global economy, cannot properly be discussed without the presence at the top table of countries such as China, India and Brazil.

I have just looked at the agenda for the Deauville meeting and I am more convinced than ever that this is a monumental waste of time and money. The cash spent on the security measures alone, which involve more than 12,000 police, gendarmes and soldiers, could have made a significant contribution to the consolidation of Tunisian democracy. The whole circus, with its preparatory meetings of officials known as "sherpas," and what the French wonderfully call "sous-sherpas," will be repeated all over again in the run-up to the November G20 meeting.

Not that the G20 is working well either. But it is a grouping much more appropriate to the economic, political and cultural realities of the 21st century. All the efforts of Western or post-Western leadership should be dedicated to making it work better. The best way to start would be to abolish the G8, and Mr. Obama will soon have an opportunity to do just that. Next year, the United States is supposed to be hosting the G8 while Mexico is to host the G20. Mr. Obama should privately agree with other G8 members, and with Mexico, to roll the G8 into a single G20 meeting. All efforts could then be concentrated on making the G20 more serious and effective than it is now.

Anyone who abolishes a useless committee or institution should be awarded a medal, and this would deserve a large one - a kind of Global Medal of Honour. More broadly, this U.S. President is qualified like none before him to move forward from the outdated Cold War notion of "the leader of the free world" toward being the leader of a movement toward a free world. Cometh the hour, cometh the man. In this case, we have both. They just need to get together.

Timothy Garton Ash is a professor of European studies at Oxford University and a senior fellow at the Hoover Institution. 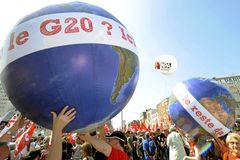