U.S. President Barack Obama has taken to displaying flashes of emotion and candour that have many people doing double takes. During his first six years in office, "No-drama Obama" became known for his dispassion and restraint. Suddenly, he's breathing fire without regard for whom he burns.

No longer facing another presidential or midterm congressional election, Mr. Obama is speaking his mind on a number of issues on which he had previously shown reserve, even upbraiding journalists who should "know better" and wading into the murky Bill Cosby affair.

Nothing has unshackled Mr. Obama's tongue, however, like the Neville Chamberlain epithets directed at him in the wake of his administration's agreement with Iran to freeze its nuclear program in exchange for relief from economic sanctions.

Few of them likely anticipated Mr. Obama's acid response. "Many of the same people who argued for the war in Iraq are now making the case against the Iran nuclear deal," he charged in a speech last week. "It's those [Iranian] hard-liners chanting 'Death to America' who have been most opposed to the deal. They're making common cause with the Republican caucus." He later tweeted: "There's no such thing as a better deal. Walking away risks war."

His new-found feistiness no doubt delights his supporters. But it could ultimately end up undermining his own case and sabotaging his legacy.

Accusing the deal's opponents of being warmongers only further polarizes a debate that divides Americans and risks denying Mr. Obama the broad public support he needs to ensure that his deal survives the 2016 election.

Reopening the Iraq war debate certainly won't help his cause. Few now in Congress defend George W. Bush's decision to go to war in 2003. But plenty blame Mr. Obama's 2011 move to withdraw all U.S. troops from Iraq and his failure to curb the Shia-led Iraqi regime's sectarian urges for contributing to the rise of Islamic State.

The regional instability sown by Islamic State, they argue, is likely only to increase once sanctions on Iran are lifted. Iran will have access to more than $50-billion (U.S.) in now-frozen assets and countless billions more in oil revenues to finance its sponsorship of Hezbollah, Hamas and the Bashar al-Assad regime in Syria, not to mention accumulate weapons for itself.

"The truth is that Iran has always found a way to fund these efforts," Mr. Obama countered in his speech. "And whatever benefit Iran may claim from sanctions relief pales in comparison to the danger it could pose with a nuclear weapon."

His problem is that he has not persuaded enough members of Congress, including Democrats, that the deal actually achieves what he says it does. "To me, the very real risk that Iran will not moderate and will, instead, use the agreement to pursue its nefarious goals is too great," New York Democratic Senator Chuck Schumer said last week in announcing he would vote against the deal.

As it stands, the Republican-controlled Senate is expected to pass a resolution in September rejecting the agreement, and preventing Mr. Obama from lifting sanctions on Iran. The President has vowed to veto that resolution. But for his veto to stand, he needs to rally at least one-third support in both the Senate and House of Representatives. Right now, that vote is too close to call. And even if his veto were to stand, it might be a Pyrrhic victory.

Without a broad show of support for the deal in Congress now, the next president could face political pressure to scrap it. By then, it would likely be too late to get China and Russia to agree to reapply the economic sanctions lifted under the agreement. And U.S. sanctions alone would not be strong enough to pressure Iran back to the table.

The current deal's demise would mean squandering a historic opportunity for peace and depriving Mr. Obama of his desired legacy. As he said last week, the Iran deal has sparked "the most consequential foreign policy debate that our country has had since the invasion of Iraq."

But members of Congress don't respond well to insults. Mr. Obama needs to show them some of the same diplomacy he used on Iran.

Where's No-drama Obama when you need him?

Opinion
No Joke: Jon Stewart became what he once denounced
August 3, 2015 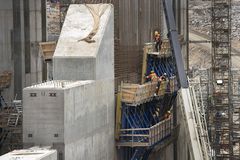