"We're not going to make Syria into a proxy war between the United States and Russia," the U.S. President said in October. "This is a battle between Russia, Iran, and Assad against the overwhelming majority of the Syrian people. This is not some superpower chessboard contest."

What sounded like wishful thinking then has proved to be just that. The "quagmire" that Mr. Obama predicted his Russian rival was getting into has turned out to be both a tactical and propaganda victory for Mr. Putin that has decisively turned the Syrian war in Mr. Assad's favour.

This despite U.S. moves to increase the flow of weapons to the CIA-backed rebels battling the Syrian leader. The Syrian conflict was and is a U.S.-Russia proxy war reminiscent of the Cold War.

Mr. Obama has spent his presidency preventing the United States from being drawn into yet more foreign conflicts that only drain his country's morale and resources without increasing its security.

But an obsession with avoiding past mistakes can sometimes lead to making bigger ones. That's the case in Syria, whose civil war has metastasized into a geopolitical chess game with massive stakes for the West, global security, and the future of the Middle East.

Of course, it remains first and foremost a humanitarian crisis whose scale in death and suffering will forever tarnish Mr. Obama's legacy. The negotiation of a "cessation of hostilities" in February allowed the Obama administration to claim it was doing something to end the bloodshed. But, quite predictably, Mr. Assad's forces and their Russian accomplices have indiscriminately violated the ceasefire agreement, even denying humanitarian aid to Syrian civilians trapped in the warfare. They have shown no mercy for women or children, bombed hospitals and lied shamelessly about whom and what they're targeting – making a mockery of the United Nations.

There are bad actors on both sides of Syria's civil war, but none comes close to having perpetrated the violence and killing of Mr. Assad and his allies. After backing down from bombing Assad forces in 2014, the Obama administration decided to focus U.S. air strikes on the Islamic State, even though Mr. Obama insisted IS posed no existential threat to U.S. security, and Mr. Putin decided to play chess.

As Assad forces prepared their ultimate assault to recapture areas held by non-terrorist rebels in Aleppo, Syria's largest city before the war, the Obama administration last month offered a deal to Mr. Putin. Under the deal, whose terms have since been leaked, the Russians and Americans would share intelligence to identify IS and other terrorist targets. In exchange, Mr. Assad would forgo barrel bombing non-terrorist rebels and civilians.

Mr. Obama himself last week conceded that he "is not confident that we can trust the Russians and Vladimir Putin." So just what such an agreement might accomplish, other than allowing Washington to temporarily beat back critics of its passivity, is a mystery to pretty much everyone who is anyone in the U.S. foreign policy establishment, including a long list of disillusioned former Obama advisers – or, as those in the West Wing disdainfully refer to them, the Blob. The latter, according to a recent New York Times Magazine profile of Mr. Obama's deputy national security adviser Ben Rhodes, "includes Hillary Clinton … and other Iraq-war promoters from both parties who now whine incessantly about the collapse of the American security order in Europe and the Middle East."

Instead of dismissing the whiners, maybe the Obama administration should listen to them for a change. Even if Russia signed on to Washington's latest plan, it would only cement Mr. Assad's lock on power and allow Russia and Iran to expand their influence in the region.

It would also drive the Islamic State and other terrorist groups into Turkey, where they would access a more direct route to the West, all while Mr. Putin exploits fault lines within NATO by courting Turkish President Recep Tayyip Erdogan, who is taunting the West.

Like it or not, geopolitics is a chess game. Mr. Obama made the wrong moves on Syria from the start, leading to the very proxy war he figured he was too clever to ever get entangled in. 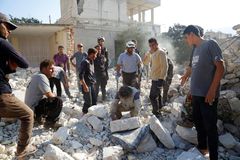