Columnist and broadcaster Michael Coren's most recent book is Epiphany: A Christian's Change of Heart & Mind Over Same-Sex Marriage.

We are living in the age of the Teflon Pope. Francis has many positive qualities and has said and done wonderful things, but he also has caused pain and concern more times than we might think. Yet on each occasion, he seems to escape almost unscathed. Whereas media loathed Benedict, they positively adore his successor. But now, perhaps, he has gone too far.

Francis was in Chile last week, where the clergy sex-abuse crisis has – as in so many places – ripped through the nation's religious sensibilities. It's made worse, however, due to still-open wounds concerning the Pinochet dictatorship and the part played in those dark days by the extraordinarily powerful Roman Catholic Church. The general view is that the church didn't do enough to oppose the dictatorship and that some clerics were positively supportive.

But the abuse issue itself has nothing to do with politics, and the most notorious abuser was Father Fernando Karadima, a high-profile priest who ministered to the Chilean elite. In 2010, he was finally exposed, but accusations had been made as early as 1984, when letters of complaint were dismissed and destroyed. The Vatican concluded that he was indeed guilty, but because he was old, they sentenced him to live out the rest of his years in prayer and penance. He is still alive and is still, one assumes, praying. There was dismay at the lightness of the punishment, but the man couldn't be prosecuted criminally due to a strict statute of limitations.

Three bishops were also accused of knowing of Karadima's crimes and of protecting him. Rome disagreed – and even promoted one of them, Bishop Juan Barros. Almost three years ago, Francis rushed to Barros's defence, arguing that his critics were being used as tools by "leftists."

This has been one of the factors in devastating Chilean church attendance, and the purpose of Francis's visit was to reboot interest in a besieged Catholicism. But just before Francis arrived, a 2015 Papal letter to the country's bishops was leaked to the press. In it, Francis responds to a Chilean request that Bishop Barros not be promoted and insists that he fully supports the accused man. The leak was obviously politically timed, but there was still an opportunity for Francis to retract his earlier position.

Instead, he gave an interview in which he accused those attacking Barros of slander. "The day they bring me proof against Bishop Barros, I'll speak. There is not one shred of proof against him. It's all calumny."

First, there are many shreds, which is why his fellow bishops in Chile had earlier opposed Barros's advancement. Second, many of those making accusations are themselves victims of rape and molestation by Roman Catholic clergy, some of them by the very man – Father Karadima – who Bishop Barros is said to have covered up for and thus enabled.

The Chilean people and church were devastated and furious, and even allies of Francis outside of Latin America were shocked at what seemed like extraordinary arrogance, insensitivity and even cruelty. Francis did eventually accept some of the criticism, but it was far too little and far too late.

This is not the first time he has acted egregiously on the subject. In 2015, in Washington, he praised American bishops for their response to abuse victims, stating: "I realize how much the pain of recent years has weighed upon you, and I have supported your generous commitment to bring healing to victims, in the knowledge that in healing we, too, are healed."

The reality is that U.S. bishops had to be forced into admitting there even was an abuse crisis, and often tried to silence victims through religious and legal pressure.

The Roman Catholic Church is at heart a patriarchy, with a celibate elite claiming equality to believers but, in fact, regarding themselves as set apart by vocation and discipline. Within this group are numerous good and holy men, but also a sexual immaturity and brokenness in far greater proportion than in the general population. Frankly, both abuse and its denial and obfuscation were grimly inevitable.

Some commentators are now questioning the Pope's motives, speculating that he may have dealt poorly with similar abuse horrors in his native Argentina. It's not an unreasonable thesis, but I believe the explanation is more straightforward. Francis is 81 years old and, in spite of what his acolytes claim, almost all he has known is the church. He loves it and loves his fellow priests. This good – but far from infallible – man is quite simply defending what he loves, sometimes blindly, and in so doing is causing greater agony than he perhaps realizes. 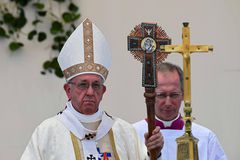 Pope condemns fake news and its use for political gain
January 24, 2018
Follow us on Twitter @globedebate Opens in a new window
Report an error Editorial code of conduct
Due to technical reasons, we have temporarily removed commenting from our articles. We hope to have this fixed soon. Thank you for your patience. If you are looking to give feedback on our new site, please send it along to feedback@globeandmail.com. If you want to write a letter to the editor, please forward to letters@globeandmail.com.
Comments are closed