He went to Asia and created a ruckus, centred on trade, with behaviour described in many countries as downright rude. No, not Donald Trump. Justin Trudeau.

The story about the ugly Canadian and his ungracious behaviour – failing to show up to a meeting where the leaders of 10 other countries expected to sign an agreement-in-principle of the Trans-Pacific Partnership, Version 2.0 – is rejected by senior Liberal aides as mostly malarkey.

Sources from other TPP countries were telling reporters the Canadians "screwed" everyone, while Canadian officials said other countries got carried away before an agreement was ready and that the meeting of 11 leaders was cancelled after Mr. Trudeau's meeting with Japanese Prime Minister Shinzo Abe ran late.

Anyway, a deal was announced a day later.

But no matter who tells the tale, there are still real differences on the substance. And they remain even after an agreement-in-principle was signed on Friday.

The 11 governments still in the TPP talks wanted this to be a symbol that trade liberalization goes on even when Mr. Trump's United States is going the other way. The other 10 governments wanted to show that they were fully committed to TPP 2.0. Mr. Trudeau wasn't ready to go all in. This was his "Canada first" moment.

The Canadian government insisted on inserting into this "agreement" more pointed caveats about disagreements – Canada's disagreements.

Mr. Trudeau faced objections from home and that really did seem to cool his ardour for the TPP in recent weeks. There were concerns that provisions on cultural industries would create a political backlash in Quebec. And there was an outcry from the Canadian auto sector, including parts makers and unions, who considered the first TPP a bad deal.

Auto-sector interests mounted an intense lobby in the past month. Most notably, Flavio Volpe, the president of the Automotive Parts Manufacturers' Association, called ministers and senior aides. The message: The first TPP was a bad deal for the Canadian auto sector, so the Trudeau government should not agree to anything unless it's clear Canada wanted a different deal on autos. "I think they heard us," Mr. Volpe said.

The first TPP was a deal that included the United States.

The Obama administration and Japan cut a deal to open the North American market over the objections of Canada and Mexico, who felt it weakened their preferential access to the U.S. market.

And though they managed to ease the impact in later talks, the final deal was still seen as a bad one for the Canadian auto sector. This time, the talks don't include the United States. So why agree to the same terms?

Canada is sweating through NAFTA negotiations in which Mr. Trump's administration wants to raise the proportion of North American content in a vehicle before it can be shipped into the U.S. market duty-free.

Negotiating lower regional-content rules in the TPP may only complicate that.

So Canada insisted that provisions about autos, far from being agreed upon, be put into a "work plan" for renegotiation, guided by language that indicates Canada wants concessions from Japan.

The two biggest economies still in the TPP talks are at odds over a major sector. And Canada also sought concessions in other areas, including an agreement to discuss a special exemption for its cultural industries.

There are political reasons why Mr. Trudeau's desire for a new TPP has cooled. It's one thing to embrace trade deals, but another to rile the auto sector, dairy farmers, the political left and Quebec. But those political worries reflect trade concerns. New Zealand doesn't care about auto competition from Japan; Australia isn't renegotiating NAFTA.

But Mr. Trudeau did annoy the others. Other countries had raised late qualms, such as Vietnam. But Mr. Trudeau clearly put the chill on the drive for a symbolic announcement.

Even the Canadian account of what led to Friday's missed meeting demonstrates that. Canadian officials said Mr. Trudeau didn't stand up the other leaders at a signing ceremony.

He wasn't expecting a signing – though other leaders may have. And he was held up in a meeting with Mr. Abe, where he was explaining that Canada still wasn't satisfied.

It was Mr. Abe who walked into the leaders' meeting 30 minutes late to say it would be cancelled, as Mr. Trudeau wasn't ready to bless the deal.

The other TPP leaders wanted a symbol of commitment, but Mr. Trudeau has a nervous industry, touchy constituencies and a fragile NAFTA to worry about – good reasons not to go all in.

'It should come as no surprise,' says Trudeau about Canada not signing TPP deal
November 10, 2017 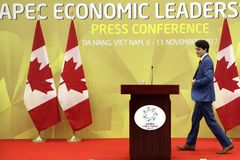 TPP countries salvage agreement to keep trade deal alive
November 10, 2017
Japan hails progress in TPP trade talks, but discord raises doubts
November 9, 2017
Follow Campbell Clark on Twitter @camrclark
Report an error Editorial code of conduct
Due to technical reasons, we have temporarily removed commenting from our articles. We hope to have this fixed soon. Thank you for your patience. If you are looking to give feedback on our new site, please send it along to feedback@globeandmail.com. If you want to write a letter to the editor, please forward to letters@globeandmail.com.
Comments