Derek Burney was Canada's ambassador to the United States from 1989-93. Fen Osler Hampson is a distinguished fellow and director of global security at the Centre for International Governance Innovation and chancellor's professor at Carleton University in Ottawa.

With tensions brewing in the Asia-Pacific, is Canada ready for World War III? Many security analysts, including highly respected former U.S. defence secretary Robert Gates, see the greatest danger of global military confrontation emanating from the dangerous flash points in this region.

That is not to say that we are going to war tomorrow or any time soon. But the risk of major interstate conflict is growing as resurgent nationalism, nuclear proliferation, great power rivalries and new territorial disputes threaten the fragile stability of the post-Cold War order in the Asia-Pacific. As Richard Haas, president of the U.S. Council on Foreign Relations, recently wrote, these are all manifestations of a "world in disarray."

Some of those dangers were fully on display as world leaders gathered at the G20 summit in Hangzhou, China, and then the summit of East Asian leaders in Vientiane, Laos, last week. In a brazen display of chutzpah, North Korea grabbed headlines by first firing off three ballistic missiles from Hwangju county in the country's southwest into the Sea of Japan. It then carried out a major nuclear underground test that triggered earthquake monitors around the globe – its fifth and biggest explosion to date.

World leaders have rushed to the microphone to express their dismay. But stout statements that a nuclear North Korea will not be tolerated ring hollow given that Pyongyang's nuclear capability is already well advanced. Like chickens in the barnyard, there has been a lot of clucking and ruffling of feathers, but precious little, so far, in the way of direct, concrete action.

U.S. President Barack Obama has threatened to slap more sanctions on North Korea's already heavily sanctioned regime. But the diplomatic carrot and stick approach of the past decade has failed abysmally. Equally, sanctions have had no constraining effect and won't do much to scare its increasingly erratic and unpredictable "Supreme Leader," Kim Jong-un, unless China also decides to play ball. There's the rub. China wants Mr. Kim and his murderously repressive regime to serve as a buffer against South Korea's democratic juggernaut. It also fears a massive influx of refugees across its borders if his regime collapses.

However, time is running out on the dangerous nuclear dance with North Korea's leader. He may soon be able to put a nuclear warhead on a missile that is capable of holding not only South Korea and Japan hostage, but also cities on both seaboards of the United States. Some analysts believe it is only a matter of a few years before North Korea has this capability.

Mr. Obama has already promised South Korea advanced anti-missile defences that could shoot down North Korea's missiles, known as the THAAD (terminal high-altitude area defence) systems. Beijing has objected, but accelerated deployment should be a top priority. Japan, which is moving quickly to upgrade its own missile defences should deploy the system too. Sending two U.S. B-1 bombers on a flight across South Korea on Tuesday was a show of force for all concerned.

Beijing should be reminded that the system is to defend Seoul and not threaten China, which has to get serious about disciplining Pyongyang. The only effective response will come if and when China sees the impact of North Korea's action against South Korea or Japan as damaging to its economic interests.

The Security Council also has to back its own rhetoric with action by imposing a complete ban on North Korea's coal and iron ore exports, which are its principal exports, while closing remaining loopholes in North Korea's access to foreign exchange.

Canada has major economic, if not direct security, interests in this region and should join vigorously any tangible measures to thwart North Korea's dangerous ambitions. When the UN General Assembly begins next week and world leaders, including Justin Trudeau, take to the stage in New York, Canada should publicly express its own support for tougher sanctions against North Korea and urge other countries to do the same.

We also need to send a strong message to Beijing that it is time for it to start exerting some real pressure on North Korea to disband its nuclear program. It is important to remember that we were one of the early signatories of the Proliferation Security Initiative, of which North Korea was the principal target.

The last thing the world needs is a paranoid dictator who has his finger on the nuclear button. Kim Jong-un holds a volatile match that could easily ignite World War III. Given the desperate plight of his fellow countrymen, he really is one leader with little to lose.

China holds the key to the North Korean conundrum
September 12, 2016 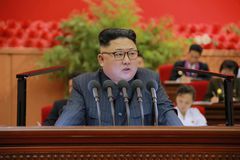