In the debate over the proper policy course for governments to assist in getting our economy out of its current doldrums, economists, politicians and policy wonks have essentially split into two camps.

This debate is being played out around the world, including, not surprisingly, Ontario, where the economy has been going through a very difficult patch of reduced employment in the manufacturing sector, increasing debt and deficits and growing pressures on our health care system.

As the Ontario Economic Summit begins in Niagara, I would argue that neither course of action comes anywhere close to dealing with Ontario's challenges today, and into the future. Either policy framework will simply contribute to the deterioration of our economy.

To suggest that piling on more debt to fund an existing government apparatus that is dysfunctional is a solution to a problem akin to suggesting that alcoholism can be cured through increased alcohol consumption.

Likewise, when the future of Ontario depends on educating and training our people and attracting and retaining the best and the brightest, the notion that we should be reducing or risking the deterioration of public services is an equally bizarre solution to a serious problem.

The problem in Ontario, as in many other jurisdictions, is that government has not kept up with the pace of change in our society. In the 1990s, private sector companies realized that in order to survive in an increasingly global economy, one needed to focus on one's core competence and comparative advantage. Where that wasn't the case, it was best to sell or outsource those entities or functions. In addition, it was critical to invest heavily in technology and human capital and to ensure that employees were incented to embrace change, rather than to resist it.

While it should have been focused on the quality of education and health care, a clean environment, safe streets and an efficient transportation system – all things that government has primary responsibility for – government has continued to perform functions it is badly equipped to perform, underinvested and poorly invested in technology, and created a work environment that rewards compliance and seniority rather risk-taking and innovation.

This has resulted in an inefficient, unresponsive and inflexible system with unhappy and under-motivated employees. Needless to say, it is also extremely costly for the value it delivers.

In short, government is a drag on the economy when it needs to be the reverse.

Neither stimulus nor austerity will cure that problem. The question is: What will?

The answer, I believe, is to go through the sometimes painful, but ultimately rewarding exercise that successful private sector companies did, and continue to do.

1. Focus on your core business. Government's job is to set the policy framework within which other actors in society perform their functions. It sets the rules, and enforces them, whether that applies to public safety, the school curriculum, health care standards and access, land use policy and corporate and commercial laws. It decides where and when public infrastructure is built, the standard to which it should operate and causes licenses and permits to be issued. In short, the government sets the rules and enforces them, whether that applies to individuals, corporations or those involved in the voluntary sector. It also decides on how and from whom taxes should be collected to pay for common services, and when and how much to assess user fees.

2. Sell your interest in current operating businesses over time and use the proceeds to invest in new public assets that will improve productivity, create new economic activity and improve the quality of life. One needs only to look at the transportation system in the GTHA to identify a crying need for investment that would accomplish all three of the aforementioned goals. The rationale for retaining an ownership interest in an already built electricity transmission system that can be regulated by a government regulator while one debates new "revenue tools" escapes me.

3. Outsource most of the "service delivery" functions of government. In areas of service delivery where one can make an "apples to apples" comparison, public sector costs are twice that of the private sector, and customer satisfaction is lower.

4. Invest in technology. In both health care and education it is clear that outcomes are substantially better where wise investments in technology are made, caused to be made, or when their adoption is encouraged.

5. Focus regulation on outcomes, rather than process and compliance. Whether in regulating capital markets, establishing land use rules or setting standards for health and safety, regulation should work towards creating an environment where the rules are clear and transparent and the objectives consistent with overall government policy. Innovation and incentives have been found to achieve overall public policy objectives more effectively than slavish dedication to outdated rules, backed up by inadequate enforcement.

6. Invest in your employees and create incentives that match the desired outcomes. Wage freezes and the elimination of properly structured performance bonuses will ensure failure of any attempt to change behaviour.

None of this is easy, nor will it be accomplished quickly. In fact, trying to do too much too fast will guarantee failure: setting and adhering to clear goals and objectives will be an important part of ensuring success. The societies that find the most effective way to deliver the highest quality public services at the most competitive cost with the a dedicated work force focused on innovation and embracing change will be the winners in the increasingly competitive world in which we live. Continuing the false debate over stimulus versus austerity will increasingly divide the population and further deteriorate our standard of living and quality of life. 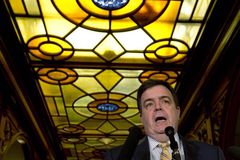 Ontario’s pension ambitions are a big risk and a hard sell for Wynne
October 16, 2013 Opinion
Lawyers are too expensive for most Canadians. Give more work to paralegals
November 5, 2013