Despite a 14-year run in office, the Ontario Liberals haven't had much swagger of late. But that may change. As the government turns the corner on a balanced budget, Ontarians are about to see the government shift into an explicitly small-l liberal groove for the first time in almost a decade.

Cast your mind back. During the Great Recession, Ontario's balanced budgets of 2006 and 2007 gave way to $20-billion-a-year deficits in 2008 and 2009. While the public was hardly clamouring for fiscal discipline in the era of GM's bankruptcy, premier Dalton McGuinty nevertheless made a promise to balance by the year 2017.

The province has since held by that pledge, even after the Liberals chose a new premier, Kathleen Wynne. But fiscal discipline is no longer a key vote driver with the Liberal coalition. While in the mid-00s balanced budgets were the necessary precondition to be seen as competent managers, public opinion subsequently shifted. Today, deficits are no longer anathema.

In fact, the belt-tightening required to balance the budget may have been a large factor in Ms. Wynne's poor postelection polling. Voters elected Kathleen Wynne as a progressive "breath of fresh air" who would build Ontario up with public spending. Those voters felt a lunch-bag letdown when her first three years with a majority government were spent doing not-so-Liberal things such as managing down labour-cost pressures and selling Hydro One.

With a balanced budget now in the works, the Liberal Premier appears likely to begin governing unbound. Ms. Wynne is now in a position to undertake a much more aggressive agenda in line with the deficits and infrastructure spending of the popular Trudeau Liberals. While that approach will find no friends with National Post editorial writers and Bay Street, it is likely to prove more popular than the austerity of the past decade.

This Great Shift Left will see the end of 10 years of austerity and incrementalism in pursuit of a refashioning of the social compact to help Ontarians prosper in the face of globalized disruption. It is fuelled by the fastest growth in the country in 2017, growth that is expanding the fiscal capacity of the province at the exact time there is renewed permission for spending.

The Ontario government signalled its intention to move to the left over past weeks. Already they have announced:

What is waiting in the wings is even more dramatic:

Shifting left is a smart political strategy for the struggling Liberals.

The NDP has been siphoning left-leaning voters from the Grits on the back of fiscally driven decisions such as the Hydro One privatization and battles with public-sector unions to control costs. Moving left could help the Liberals win back many of these progressive voters.

But the primary threat to the Liberals remains the Conservatives. Since winning the leadership as the darling of social conservatives, Patrick Brown has been removing the Mike Harris-era rough edges off the PC Party. His efforts sparked a backlash among party grassroots with a pledge to implement a carbon tax. All of this is in an effort to remove policy differences between the PCs and Liberals so the next election is fought on "time for a change" and not over the PC's policy positions.

Shifting left will open up room between the PCs and Liberals, likely too far for the already internally assailed Brown to follow. That will give the Liberals the ability to fight the election on policy, polarize the vote between themselves and the PCs, minimize the NDP vote and make the election a choice instead of a referendum on themselves. 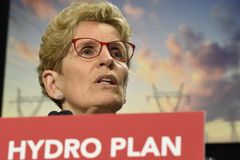 Globe editorial: Kathleen Wynne makes abrupt U-turn; runs over John Tory
January 27, 2017
Follow us on Twitter @globedebate Opens in a new window
Report an error Editorial code of conduct
Due to technical reasons, we have temporarily removed commenting from our articles. We hope to have this fixed soon. Thank you for your patience. If you are looking to give feedback on our new site, please send it along to feedback@globeandmail.com. If you want to write a letter to the editor, please forward to letters@globeandmail.com.
Comments