Quick now: What will be the fastest-rising cost for the Ontario government in the next three years?

If you guessed any of these, you got it wrong. The fastest-rising program will be paying interest on the debt. It's going up by 5.5 per cent a year, 21/2 times faster than the health budget. It's now the third-largest item in the Ontario budget, after health care and education. Servicing the debt takes $10.6-billion a year, and heading higher.

Few people talk about debt. It isn't sexy, and it certainly won't win votes. In a little over two decades, from 1990-1991 to today, Ontario's debt-to-GDP ratio has tripled. If you believe the government's projections in Thursday's budget, between 2009-2010 and 2017-2018, the province will have added about $90-billion in debt. The total debt will be about $280-billion.

It doesn't matter, under these circumstances, which party forms the next government. The debt will still be there, large and growing, and very vulnerable to a hike in interest rates. Ontario, like other governments, can pile up more debt and get financing at low rates. When, inevitably, those rates rise, the burden of financing the debt will jump.

Thursday's budget, in this sense, was like the recent federal one. The media and opposition parties in Ottawa focused on all the changes. Fair enough, but the biggest, silent increase in the federal budget was money for seniors' pensions. That didn't get a whisper of attention, because the costs go up quietly.

So, too, the post-budget coverage and debate in Ontario swirled about new spending in some programs while restraint is exercised in others; whether the Liberals met the NDP's bargaining positions to get the budget passed and so remain in office; and whether the deficit will be going slightly up or down. But beneath the radar screen will be the buildup of debt, and the very real question about whether the province can manage it.

Ontario could finance its debt more easily if economic growth and accompanying government revenues grew at least as fast as debt-servicing costs. But economic growth is going to be about half the increase in costs of servicing the debt.

As the budget itself notes, Ontario's productivity lags behind that of the United States, as does business investment. The province's cost competitiveness has eroded. What the budget didn't mention is that energy costs are soaring. Programs also are rising for such items as seniors' drugs (up 5.4 per cent) and public-sector pensions (most public-sector employees have defined benefit plans, whereas private-sector employees don't). Then there are provincial arbitrators who pay no attention to a government's ability to pay, thereby driving up costs (see police, for example) by looking only at other settlements.

Premier Kathleen Wynne's government was in the tightest of spots, not a place from which to talk about difficult stuff such as the buildup of debt. Her Liberal government finds itself between Conservatives, who hound it with demands for an election, and New Democrats, who play an annual game of political extortion with their list of demands.

It's a terrible way to run a legislature, let alone a government, but that's the way the opposition parties wish to play their hands. So the Liberals seek what they call a "balanced approach" between Conservatives who want bigger cuts in public spending and New Democrats who instinctively want to spend lots more, with the money coming from the business sector and the better off.

In some areas, the Wynne government did the right thing: 5 per cent for community and long-term care but zero increases for hospitals; an opening of the door to special levies for transit improvements in the Greater Toronto Area; additional help for people in poverty; and continuing spending restraint across many departments. Of course, the government declared itself "absolutely committed" to balance the budget in five years, but nobody should believe fiscal projections that far down the road.

Who knows in five years, let alone one, which party or parties will govern Ontario, with all its challenges, including a debt burden that quietly grows without much attention, as Thursday's budget made clear for those who care? 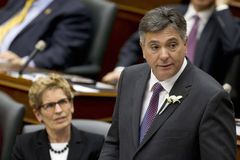 Opinion
Clusters, right to work and Ontario’s ‘prosperity gap’
May 2, 2013 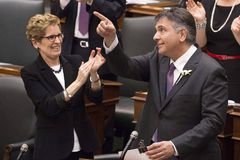