Forrest Bivens is a member of the Diversity and Race Relations Advisory Committee in London, Ont.

We all have biases. But in policing, biases have serious public safety consequences. And Ontario's recommendations for changes to carding and street checks, announced on Wednesday, do nothing to address the underlying biases when it comes to race and racial profiling.

Both subject and officer are at risk for injury – or worse – when a police and civilian interaction is founded on racism and fear. Apart from the moral repugnance of acting on racial bias, this is a public safety issue.

A recipe for disaster, a ticking time bomb: it could – and often does – spiral out of control should those fears escalate.

Minister Yasir Naqvi released an underdeveloped directive Wednesday in an attempt to quell public discontent. From day one, every police department that has weighed in has denied that their officers' carding targets are randomly selected, or that they reflect a racial bias. But the lived experiences Mr. Naqvi heard from in community consultations told him differently; they spoke of consistently racially driven interactions. Was he listening to both sides?

So item number one of his big announcement, that random stops are no longer tolerated, is as useful as a three legged chair.

Item number two was aimed at addressing transparency in the carding process and anti-bias training for police, but it fell short in a few areas. Their recommendation that this training come from the Ontario Police College – the organization that graduates police officers throughout the province and provides them with continuing ed – is such an obvious conflict of interest that it shouldn't even have to be pointed out. Anti-bias training should be supplied by an objective third party, not by diversity officers from within the policing ranks or by an organization with direct ties to police departments.

As for the carding data each department collects, Mr. Naqvi recommends public reporting on it happen annually. Yes, he recommends allowing the offending officers an entire year before we even begin to scrutinize their performance. How many folks can Officer Friendly impact in a year before a review is held?

Quarterly or semi-annual performance reviews would allow for a quicker recognition of trends. This monitoring should be attached to each officer, again in order to spot potential trends and allow for earlier intervention if warranted. No one is expecting names of officers to be made public – but the results of intervention should be shared with the community. Positive community relationships with police can only be formed when police are truly transparent.

"A zero-tolerance policy regarding racial profiling" – these are merely feel-good words-on-paper until monitoring and measurements that are both clearly defined and transparent are implemented. Racial biases and racial profiling cannot be fully eradicated, as they lie our hearts and minds. But if police are really serious about rooting out officers who continually act on their racial biases, measures can be put into place that affect career advancement and/or continued employment.

Pointing out shortcomings is easy; offering up a solution like Mr. Naqvi's is irresponsible. There is a better solution – and one that Mr. Naqvi has at his fingertips. It's called the Police and Community Engagement Review – and is a comprehensive approach. So where is it? It's a proposal that died on the vine under the regime of Toronto Police Chief Bill Blair. Did he kill it? Whatever the case, Minister Naqvi has this as a blueprint from which to draw upon if he truly wants meaningful change.

I vehemently urge the Minister to revisit his draft of pending regulations and strengthen them. This time, act outside of the political pressures and do something meaningful for the racialized communities in our province.

Open the door for more meaningful, albeit uncomfortable conversations, wherein changes of substance can emerge to improve the quality of life for the more vulnerable of our society. Anything else is just a continuation of the status quo. 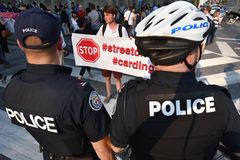