Subtlety is not a virtue in partisan politics, so opposition MPs used a meeting of the House of Commons ethics committee to make a futile attempt at demanding that Prime Minister Justin Trudeau appear, in person, to be grilled on his ethical lapses. But this little morality play also helped the opposition further a more subtle point, too.

It's that Mr. Trudeau is a same-old-ways politician after all.

If you already dislike Mr. Trudeau, you're probably thinking that's old news. But many Canadians thought of Mr. Trudeau as a new-style leader, who'd do things differently – in a less cynical, more authentic way, without old-school evasive political manoeuvres. Some still do. And some wonder if Mr. Trudeau is really that guy.

The funny thing is that when Conservatives and New Democrats went after Mr. Trudeau with a just-politics tactic, it underlined that Mr. Trudeau is just playing politics, too.

On Tuesday, opposition MPs sought to force Mr. Trudeau to testify, in long-form answers, about the Christmas, 2016, vacation that his family and a group of (Liberal) friends took on the private island on the Aga Khan, in violation of the Conflict of Interest Act. And the Liberal MPs on the committee blocked it.

One thing is clear: Mr. Trudeau was never going to appear before the committee, on the grounds that a) he doesn't want to, and b) he doesn't have to.

It would be flat-out embarrassing, after all, to sit in front of cameras, for an hour, giving lengthy answers to repeated questions about this ethical lapse. Mr. Trudeau is right when he says that the opposition is trying to make political hay.

They want to draw more attention to the story. The now-former ethics commissioner Mary Dawson has already ruled, just before Christmas, that the Prime Minister broke the ethics law, on four counts.

Conservative MP Peter Kent, who proposed a motion calling on Mr. Trudeau to testify before the committee, said there are questions that haven't really been fully answered. But Mr. Trudeau doesn't want to answer about his wife and children visiting the Aga Khan's island – on a separate trip in February, 2016 – shortly before the Aga Khan asked for a meeting about government business. That doesn't look so great. He doesn't want MPs asking if he'll pay back the $200,000 cost of the Christmas trip because, well, he won't.

So the PM dodged. Liberal MPs are the majority on the committee. New Democrat MP Nathan Cullen rightly pointed out that Mr. Trudeau is the first prime minister to be found in the violation of Conflict of Interest Act, and he should testify because he's supposed to be accountable to the Commons. Liberals defended: Toronto-area Liberal MP Nathaniel Erskine-Smith declared that Ms. Dawson's report spoke for itself, that Mr. Trudeau has apologized and the opposition could pose questions in the cut and thrust of Question Period. Ottawa-area Liberal MP Mona Fortier made virtually identical points. Then the Liberals voted down Mr. Kent's motion.

Of course, Mr. Trudeau is a politician, and an accomplished one too. His news conferences are regularly full of non-answers. Once he seemed to listen to the questions and think about answers, but since about the mid-point of the 2015 election campaign he has increasingly embraced the discipline of rote answers. He's still engaging when he's off the cuff, he's just not off the cuff much.

He has always gone out of his way not to look like a typical politician, in Justin Trudeau ways, and still does. Some of it is natural, some planned. He emotes. He sheds tears. He empathizes. He apologizes.

In fact, the way he responded to the publication of Ms. Dawson's report was deliberately in that mould. He stepped out to take reporters' questions, and said he was sorry. That was supposed to be a sign he wasn't dodging like crafty old-school politicians do.

The opposition's plan was not subtle: They wanted to remind Canadians that the Prime Minister broke the Conflict of Interest Act, cavalierly, by tooting off to an elitists' paradise. The subtle side-effect is politically valuable, too: making Mr. Trudeau duck and weave politician-style.

It won't register in any poll. But every time he does something like it, the wear-and-tear on the Trudeau magic makes him less the shiny new-style leader, and more the same-old, old-school politician. 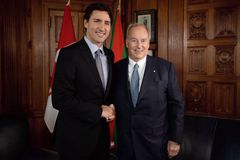 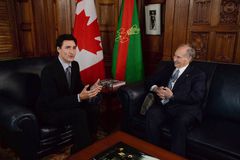