Tens of thousands of people converged on Cape Canaveral on Tuesday to watch the inaugural flight of SpaceX's newest rocket.

Towering 20 storeys above the launch pad, with 27 engines and tanks filled with super-cooled kerosene and liquid oxygen, the Falcon Heavy is the second-most-powerful rocket ever, exceeded only by the Saturn V rockets that took astronauts to the moon.

SpaceX is now at the centre of a larger technological revolution that includes reusable rockets, the miniaturization of satellites, space-based broadband and other new applications. Just as importantly, the company is leading the commercialization of space: Falcon Heavy is not only the most powerful rocket in existence, it will soon extend the economy into space.

The Falcon Heavy is made up of three first-stages from SpaceX's workhorse Falcon 9 rockets, joined together under a single second-stage, which delivers the payload into orbit or deep space. Although Elon Musk – the founder and CEO of SpaceX – had defined success as delaying any explosion until the rocket was well off the launch pad, the Falcon Heavy rose into the heavens without incident. Topping things off, the two first-stages on the outside of the Falcon Heavy's side-by-side configuration detached from the central stage and flew back to Cape Canaveral, where they landed gently on extendable legs – a feat that SpaceX has accomplished more than 40 times since 2015.

The third of the first-stages – the central one, with the payload positioned on top – had to fly farther and faster than the other two. Still, SpaceX hoped to land it on a barge in the Atlantic Ocean; it came close to doing so, before running out of fuel.

The Falcon Heavy will be able to lift the largest surveillance satellites, new and bigger space telescopes, and even a new space station into orbit. SpaceX, which plans to deploy thousands of communications satellites into low Earth orbit to provide low-cost, no-delay cellphone coverage for the globe, can now launch scores of these satellites at a time.

The cost-savings of reusable rocket stages are considerable. The Falcon Heavy can lift 64 tonnes to low-Earth orbit at a list price of just US$90-million ($113-million). A Delta IV Heavy operated by United Launch Alliance – a joint venture of Boeing and Lockheed Martin – can lift only half of that, at four times the price. Russian, Chinese and European launch providers have likewise been eclipsed. As Mr. Musk says, it is "game over for all other heavy-lift rockets."

SpaceX had already disrupted the market for mid-sized launches through the cost-savings achieved by re-usable Falcon 9s. Within the first year of pioneering reusability, the company became the world's largest launch provider. Later this year, the Canadian Space Agency will entrust Radarsat Constellation – a billion-dollar trio of synthetic aperture radar satellites for monitoring coastlines, measuring sea ice and guiding disaster relief – to a low-cost, preflown Falcon 9.

Falcon Heavy could even provide low-cost access to the moon, where U.S. President Donald Trump wants NASA to establish a base. NASA's own efforts to develop a moon rocket, the "Space Launch System," have progressed slowly and cost billions of dollars.

Other companies are developing their own niches. Planetary Resources, bankrolled by tech billionaire Larry Page, is building spacecraft that will mine asteroids for platinum, rare earth elements and ice that can be turned into rocket fuel.

Yet Mr. Musk is unmatched as a marketing genius. This week's test flight launched a red Tesla sports car on a path that will take it around the sun and then past Mars. Complete with a mannequin in a space suit, with one hand on the steering wheel, the car is a memento of humanity circa 2018, flying onward for literally billions of years.

Yesterday's launch, however, was about more than money and marketing. Falcon Heavy is a big step toward Mr. Musk's dream of a truly massive methane-fuelled machine that will be able to fly to Mars, land there and then return to Earth. Mr. Musk has long been intent on colonizing the Red Planet. Now, he might just do it.

Along the way, the South African-born savant is inspiring a new generation. SpaceX is run by hipsters. Mr. Musk, the inspiration for Iron Man, has transformed himself into a cultural icon through a combination of eye-catching accomplishments, wealth, style and media savvy. And young people, around the planet, are lifting their eyes toward the stars. 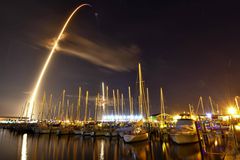