Have you ever permitted a lover to take nude photographs of you? Photos you would really prefer weren't made accessible to the entire world? Does it terrify you to be reminded by the current inquiry involving Manitoba Associate Chief Justice Lori Douglas that you're potentially as vulnerable as she is to such humiliation?

It should: Canadian law offers little protection against such use.

Prior to being appointed to the bench in 2005, Ms. Douglas practised law with her husband, Jack King. Nine years ago, Mr. King gave nude photos of his wife to client Alex Chapman and directed him to websites where the photos had been posted in order to entice Mr. Chapman to have sex with her. Mr. King has admitted to sexually harassing Mr. Chapman, pleaded guilty to professional misconduct and been ordered to pay $14,000 in costs. An inquiry is now probing whether Justice Douglas played any role in the harassment.

In the meantime, however, even the national media are publishing links to those apparently ineradicable photographs. How does Canadian law protect people from such a devastating violation? Not well.

If the subject of the photographs had taken the images herself, she would hold copyright in them and could sue for violation of that right. If someone else took the photos being distributed and was willing to pursue the relatively effective remedies that a copyright lawsuit provides, he would be in a position to help the subject of the photos. For example, Mr. King, as the photographer – and deeply sympathetic to his wife's anguish – could sue every media outlet, website, blogger and faxing lawyer who reproduced or distributed the images without his consent. This might allow him to stop the distribution and collect damages.

Unfortunately, in actual practice, the person who snapped the compromising photos is commonly the very person who is maliciously distributing them. In such cases, the photographer's intellectual property rights receive greater protection than the subject's right to privacy.

However, those tempted to humiliate another adult in this manner should know that Australia has begun to award damages against parties who harass and humiliate former partners through the distribution of intimate recordings. A Canadian precedent may soon follow.

In the meantime, our criminal law offers some recourse to pursue individuals who disseminate nude photographs without the subject's consent, but the options available aren't ideal.

For example, if someone was unaware that the compromising photographs were being taken, then the distribution could be captured by the criminal offence relating to publication of voyeuristic recordings. But that doesn't reduce the anguish of those who consented to being photographed as part of sex play.

It is, of course, always illegal to threaten someone with extortion, whether or not the threat involves the possible release of naked photographs in return for money or some other benefit.

But extortion, child pornography and peeping Toms aside, Canada has no standalone criminal offence of invasion of privacy that Justice Douglas could invoke to stop her husband, Mr. Chapman, his lawyers, the metastasizing websites and the national media from publishing either the embarrassing photos or links to them.

In contrast, Germany's criminal code specifically stipulates that disseminating intimate pictures of another without authorization is a criminal offence. Closer to home, New Jersey successfully invoked such an offence in a case involving the dissemination of videos of a young gay man who later jumped off the George Washington Bridge when he discovered that intimate images of himself had been uploaded and distributed on the Internet.

We can't defensibly wait for the impetus of another human choosing mortification-inspired suicide to be clear that our legal system's tolerance of this cruel practice is unjust. Surely the current case is evidence enough that in a digital age that facilitates exposure and heightens humiliation, we can do better. 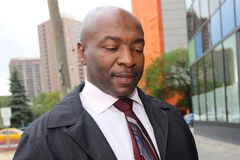 Opinion
The persecution of Lori Douglas
July 14, 2011
Follow us on Twitter @globedebate Opens in a new window
Report an error
Due to technical reasons, we have temporarily removed commenting from our articles. We hope to have this fixed soon. Thank you for your patience. If you are looking to give feedback on our new site, please send it along to feedback@globeandmail.com. If you want to write a letter to the editor, please forward to letters@globeandmail.com.
Comments are closed