This is the U.S. primary season that keeps on giving – headaches, indigestion and nausea.

Usually, by this point in the election cycle, both parties have settled on their respective presidential nominees and the remaining primaries before their conventions are formalities. Americans, like the rest of us, can enjoy spring without having to listen to the bile for a while.

This time, not only has Hillary Clinton not locked up the Democratic crown she expected to be handed on a platter, the race between her and Vermont Senator Bernie Sanders is getting closer, and nastier, by the minute. By the time Ms. Clinton gets to her party's July convention in Philadelphia, she will be one vulnerable and tainted general-election candidate. She already has an unfavourability rating nearing that of the unstomachable Donald Trump.

Speaking of whom, Mr. Trump's me-myself-and-I campaign has finally run up against the modern political realities of data analytics, ground games and super PACs. The Trump campaign has none of these essential trappings of 2016 politics, allowing Texas Senator Ted Cruz to eat Mr. Trump's lunch when it comes to the down-in-the-trenches warfare of picking off delegates one congressional district at a time.

The arcane rules of delegate allocation, which vary from state to state, are lost on the Trump operation, which is perhaps the most laughably unserious presidential campaign since Lyndon Larouche ran for the White House from a prison cell. This means that even if Mr. Trump walks away with the April 19 primary in his home state of New York, it is increasingly unlikely that he will lock up a majority of delegates before July's Republican convention in Cleveland.

What looks improbable for Mr. Trump is mathematically impossible for Mr. Cruz, however, no matter how many primary victories he racks up from here on in. The Stop Trump forces have coalesced around Mr. Cruz not because they've learned to love the prickly and conniving Texan, but simply because they seek to prevent Mr. Trump from winning a majority of delegates. They dream of a contested convention from which a "fresh face" emerges victorious.

Republican delegates are only required to vote for the primary winner in their state or congressional district on the first ballot. It's now become clear that the Republican establishment aims to adopt convention rules that allow for the names of even candidates who did not run in the primaries to be placed into nomination. Well, one name, at least.

Paul Ryan, the perky Speaker of the House of Representatives, insists he's not interested. Then again, that's what he said about his current job until the unruly Republican caucus badgered him into taking perhaps the toughest post in Congress, one that on any given day can make the presidency look like a breeze.

For someone who claims he's not running for anything, Mr. Ryan sure looks and sounds like he's running for something. The 46-year-old Wisconsin native was just in Israel, an obligatory passage for Republican presidential contenders, where he vowed support for America's "indispensable ally" against Islamic State. Before that, he gave a big speech to congressional interns in which he championed tolerance, civility and compassionate conservativism.

He also offered a dose of humility, a welcome addition to an election season doped up on hubris. The staunch fiscal conservative said he had regretted once dividing Americans into "makers" and "takers," saying: "As I spent more time listening, and really learning the root causes of poverty, I realized I was wrong … So I stopped thinking about it that way, and stopped talking about it that way."

The speech, in which Mr. Ryan insisted "politics can be a battle of ideas, not insults" (a barb aimed at you-know-who) has already been packaged in what looks suspiciously like a campaign video.

Those eager to throw cold water on the Ryan fantasy scenario note that the Speaker did not exactly light voters on fire as Mitt Romney's vice-presidential running mate in 2012. They warn that any attempt by party apparatchiks to deprive Mr. Trump or Mr. Cruz of the nomination would reinforce the image of a fat-cat party establishment that is woefully out of touch with, and dismissive of, the popular anger driving this primary season. Millions of Trump and Cruz voters would likely choose to stay home in November as a result.

Yet, for a Republican Party facing electoral oblivion and years repairing the damage, it is a risk that increasingly seems worth taking. The blissfully uninformed and erratic Mr. Trump is as dangerous as the clever and mean-spirited Mr. Cruz. What's left but a convention coup? 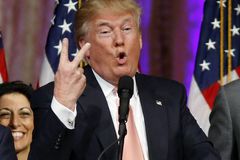