Mexican President Enrique Pena Nieto has cancelled a trip to Canada in June to signal his country's unhappiness with the Harper government's refusal to talk about removing visas for Mexicans coming to Canada.

Mr. Pena had intended to come to Ottawa and attend the Global Petroleum Show in Calgary. There, he was going to talk about his government's new policy of opening some of the government's state-owned oil monopoly, Pemex, to foreign partnerships. But the President was apparently so disturbed by our position on visas for Mexicans that he has called off the trip, according to Canadian sources.

Mr. Pena met Prime Minister Stephen Harper in Mexico City in February, hoping for some flexibility on the visa issue that has angered many Mexican political, business and journalistic leaders. Visas were imposed in 2008 after a three-year surge of refugee applications from Mexico, the vast majority of which were turned down. Despite repeated Mexican requests for the lifting of the visas, they remain in place. Following Mr. Harper's recent, testy trip to Mexico, there is no indication that they will be lifted.

The Mexican government tried to make Mr. Harper's trip a success, saying all the proper diplomatic things in public.

A potentially nasty dispute over Canadian beef was settled when the Mexicans accepted Canadian assurances that inadequate enforcement of health regulations at certain slaughterhouses were being resolved. Ottawa had been worried sick that word would leak out about Mexican inspections in Canada, followed by the possible Mexican curtailing of beef imports that could alarm other importing countries.

The Mexican leader organized a lavish state lunch for Mr. Harper, with the orchestra playing some of his favourite Beatles tunes and Canadian songs. They gave the Prime Minister a guitar signed by Mexican-American musician Carlos Santana and gifts for Mr. Harper's children.

But the charm offensive was lost on Mr. Harper, who remained unyielding in the face of Mexican entreaties at least to talk about removing the visa requirement. (Mexico still intends to open a new consulate in Winnipeg.)

Whereas at their joint press conference, Mr. Pena spoke blandly about working with the Canadian government to solve the problem, Mr. Harper coldly stated that visas were an issue for sovereign governments and that Mexicans' entry to Canada still posed security issues.

The next day, Immigration Minister Chris Alexander further infuriated the Mexicans when he evoked the possibility of drug cartels setting up in Canada if visa restrictions were lifted. The Mexicans also noted that the Harper government had to scramble to get a corporal's guard of business leaders to accompany the Prime Minister. On the other hand, Mr. Harper pointedly commented on the trade imbalance whereby Mexican exports to Canada greatly exceed Canadian exports to Mexico.

The visa issue is a sensitive one for Mexico. Mr. Pena and his senior ministers and officials believe the visas relegate Mexico to second-class status, whereas the countries should treat each other as equals under the North American free trade agreement.

The Mexicans recall that their citizens did not need visas before 2008. They believe another refugee surge is highly unlikely with the introduction of Canada's new refugee policy, which makes it easier for Ottawa to reject weak claims.

Mr. Harper doesn't like being pushed – he frequently digs in his heels when criticized publicly, and may well resent the aggressive and public diplomacy employed by Mexican officials against the visas. (Major Canadian business and tourism associations, some of whose members have lost business from the drop in Mexican visitors, have also decried the visas.)

The government is working on a new system involving biometric tools for visitors to Canada. It is supposed to be operational in 2015. It could be that the visas would be lifted when that system begins working, although officials have given no assurances. Canadian officials do sincerely worry about a possible new surge of refugee claims from a country struggling in some of its regions with drug-related violence.

The Mexican government had hoped for some flexibility from Canada during Mr. Harper's visit – a joint study, a commitment to remove visas in 2015, a slow path toward removal, even soothing words. They got nothing.

Opinion
No bold plan for North America from these amigos
May 11, 2018 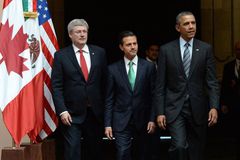 Opinion
For Mexico, legalization is freedom
May 11, 2018 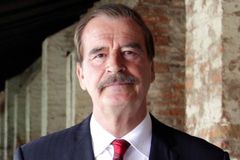