Was anyone surprised, taken aback, by the news that U.S. President Donald Trump put his signature on a White House economic report that undercuts his own statements on trade with Canada?

As contradictions go, this one, schooner-sized, ranks right up with the President's most priceless. But hypocrisies being such a frequent feature of this White House, it is viewed as a mere rib-tickler. It didn't even make the news down here.

What is news, ominous news for Ottawa, is that Mr. Trump is expected to promote the man on his team who would happily have the report shredded. Peter Navarro, the administration's protectionist zealot, has outfoxed Mr. Trump's globalists on trade and will soon be named assistant to the President.

In the stiff-headed Navarro world view, free-trade talk is globaloney. Canadian officials have long shuddered at the nativist creed of the wiry and abrasive 68-year-old. And with good reason.

He was a leading force in the torpedoing of the Trans-Pacific Partnership agreement. He was the same in persuading Mr. Trump to impose tariffs on softwood lumber from Canada, a decision which incensed the Liberal government in Ottawa.

He has long demanded the abandonment of the North American free-trade agreement, almost succeeding last spring, only to have Justin Trudeau and the Mexican leader save the deal with last-minute appeals to the President.

Currently, the maverick Harvard-credentialed economist is waging a battle to have the President impose across-the-board tariffs on steel and aluminum in the name of national security. The tariffs could hit Canada hard, especially Ontario. Premier Kathleen Wynne was in Washington last week, lobbying with governors and administration officials on the issue. A decision must be made by April.

Mr. Navarro also favours a border-adjustment tax, which Mr. Trump considered imposing last year. Author of the book Death by China, he is the administration's leading basher of the Middle Kingdom. Trade moderates fear that, if he gets his way, he'll touch off a global trade war as countries retaliate with tariffs of their own.

Reports used to depict Mr. Navarro as stalking the halls near the Oval Office waiting for opportune moments to slip in and bend the President's ear. Apparently, he succeeded. No longer is he second fiddle to trade moderates such as Gary Cohn, director of the National Economic Council. Senior Trump adviser Rob Porter was also in his way but Mr. Porter recently resigned over domestic-abuse allegations.

Now, Mr. Navarro would have a seat at the daily senior staff meeting. He may team well with NAFTA lead negotiator Bob Lighthizer, who is also hard-edged. With so many vital Canadian trade files in play, his ascendancy could not come at a worse time.

The fact that the U.S. economy is in good shape and that jobs are returning to the manufacturing sector does not appear to faze the protectionists. Nor does a study recently released by the National Bureau of Economic Research that warns that "protectionism is not an effective tool for macroeconomic stimulus and/or to promote rebalancing of external accounts."

That Mr. Trump now appears to be heeding the hardliners was evident on Monday in a meeting with state governors, wherein he lashed out at several countries' practices, Canada included. Of trade relations with Ottawa, he said, "They have you believe that it's wonderful. And it is, for them. Not wonderful for us."

"Canada is very smooth," he added, the suggestion being that Justin Trudeau was the snake-oil salesman, not himself.

In response to the report Mr. Trump signed, Mr. Trudeau might wish to get on the blower to the Oval Office and, document in hand, have a little chat. He could point out that the report, prepared by Mr. Trump's Council of Economic Advisers, is very welcome, that it lays out things quite nicely. "So glad you're on board with it, Mr. President. Thank you."

The call probably wouldn't have much impact. It's a good bet the President didn't even crack open the 563-page report. As for Peter Navarro, it's probably in his trash can.

Globe editorial: Donald Trump wants the benefits of trade without the costs
February 26, 2018 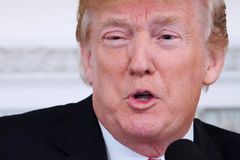 Opinion
Trump should copy Canada – not question it
February 13, 2018