Would the real Pierre Karl Péladeau please stand up? Whatever happened to the serial lock-out man, the union-busting CEO once described as "probably one of the worst employers Quebec has ever seen"?

Mr. Péladeau has travelled a long, long way on the political spectrum since he entered politics with the Parti Québécois. And he has a bit farther to go, since he is almost certain to become the PQ's next leader.

Vanished is the hard-nosed businessman who advocated the abolition of compulsory union dues and seemed to wake up every day just to hate public spending. This week, in an interview with Le Devoir, Mr. Péladeau bashed the new provincial Liberal government's austerity policy as "highly dogmatic."

"It's not surgical. It's practically with a chainsaw," said Mr. Péladeau, warning that the traditional "Quebec model" could be imperilled. Sure, taxes are higher here, but we get social programs for our tax dollar, he said. Change that course and Quebec becomes "a province just like the rest."

Aren't you supposed to be on the right? reporters asked Mr. Péladeau when he joined the PQ at the start of last spring's provincial election campaign. The province's journalists, who remember all too well the long, bitter lockouts at the highest-circulation daily newspapers in Montreal and Quebec City, are still bemused by PKP's new persona.

Was it not Mr. Péladeau, head of a communications empire, who complained and campaigned so aggressively against the "unfair competition" of the CBC? Now, Mr. Péladeau comes to Radio-Canada's defence.

Gone, too, is the private broadcaster who pushed for public financing of a brand new "Quebecor Arena" managed by his company – for which the province cut a $200-million cheque.

The concept of a "multifunctional" amphitheatre in Quebec City fools nobody: The 18,000-seat entertainment facility was not designed for Justin Timberlake shows, but for a new National Hockey League team that would provide high-value content for Mr. Péladeau's television stations.

Now, meet the socially conscious, fiscally sensible Mr. Péladeau. Last week, after a Quebec cabinet minister floated the idea of a government subsidy for the future and hypothetical team, Mr. Péladeau ridiculed the idea as a "strange paradox." Just when Quebec is slashing social spending, it would finance a bunch of multimillionaires? Hello! (Couldn't the same reasoning apply to the hockey arena? Oh, right, it's "multifunctional.")

Also gone is the ill-tempered, trigger-happy filer of libel lawsuits whose legal bills were said to "pay the rent" at the Montreal office of Norton Rose. Mr. Péladeau the politician is a smiling man. Not lacking in charm, soft-spoken and quite available, even for media organizations he used to be at war with. No more ad hominem attacks – just reasonable disagreement.

No doubt Mr. Péladeau would say the media got his image wrong from the start. After all, the collective agreement at the Journal de Montréal was said to have been the most generous in any newspaper in North America, thanks to his late father, who wanted to avoid strikes at all cost. And a person can be for entrepreneurship, against "union abuses" and still support social programs.

Still, this has been an extreme makeover for a wannabe but undeclared leadership candidate. And a makeover of the utmost importance for Mr. Péladeau – in a party known for a strong social democratic tradition, union ties and significant support from public-sector workers, you need to show some social credentials. The public didn't know he had any, and he faces much internal party opposition.

The centre-right of Quebec's political marketplace is jam-packed like never before. The Liberals seem to be heading toward a lean, mean budget. The Coalition Avenir Québec, running second in the opinion polls, would go for even more cuts. That leaves little room for a right-leaning PQ.

Mired in third place at historic lows in the polls, his party is in dire need of some oxygen. Mr. Péladeau needs to show he can provide it – hand in hand with the party left. And with a smile. 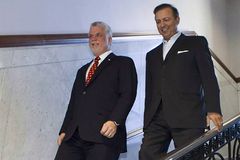 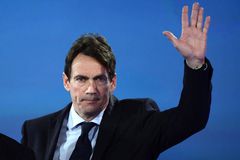