The nearly $4-billion (U.S.) project has been enveloped by a protest that looks and feels a lot like the civil rights movement of the 1960s. At the centre of the demonstrations are the Standing Rock Sioux, whose ancestral territory the pipeline crosses. They have been joined by activists from around the United States.

The dispute has been dragging on for months and has led to plenty of violence. More than 400 people have been arrested so far, including more than 140 after a recent clash with police. People have been attacked by dogs set loose by a private security firm. Tires have been set on fire, sending plumes of black smoke into air scented with pepper spray. One protester was charged with attempted murder for shooting at a police officer.

There have been pipeline protests in the United States before, but nothing quite like this. The presence of aggrieved and determined Native Americans at the heart of the uprising has given environmentalists leverage they haven't always enjoyed. In this case, it's turning out to be a powerful weapon.

What started as a small occupation has grown into a national crusade. When a rumour spread that police were using Facebook to track the whereabouts of activists at the North Dakota encampment, more than 1.4 million users of the social networking service falsely "checked in" at the protest site to confuse police about the number and identity of those actually demonstrating.

Not only was it a significant show of support for those on the front lines, but also an indication of the potential power social media holds in the war against pipelines.

The suits at Kinder Morgan Canada Inc. must be observing the goings-on at Standing Rock with utter dread. If the company's Trans Mountain pipeline expansion goes ahead, this could well be what the company faces in Vancouver, where there is widespread opposition to the project.

Among the strongest dissenters is a group of First Nations who say the increased oil tanker traffic the pipeline would drive poses unacceptable risks to their lands. They have vowed to thwart construction of the project by any means possible.

There have already been demonstrations and arrests on Burnaby Mountain, near the terminus of Kinder Morgan's pipeline. And that was before the National Energy Board gave conditional approval to the pipeline's expansion.

Those protests were merely an appetizer. If Prime Minister Justin Trudeau gives the final go-ahead next month, look out. Environmentalists are already warning that the opposition they mount will be like nothing British Columbia has ever seen before – which is quite a statement given the province's rich protest history. The demonstrations are certain to be joined, if not on the ground in spirit, by millions of Canadians across the country.

The Prime Minister has already had a taste of some of the anti-pipeline animus that exists out there. An appearance at a youth labour forum in Ottawa was disrupted by protesters who had no interest in selfies with the PM. Instead, they booed and jeered him while shouting: "Keep your promises." Meantime, in Hamilton, a woman threw pumpkin seeds at Mr. Trudeau while screaming the same thing.

Being pelted by pumpkin pits will be the least of Mr. Trudeau's worries should he give Kinder Morgan the green light.

Environmentalists in the United States have already taken credit for killing the Keystone XL pipeline. If the U.S. government capitulates in any way to the opposition to the Dakota Access pipeline, it will embolden the anti-pipeline movement like never before.

Kinder Morgan is already bracing for the firestorm that awaits final approval of its pipeline proposal. Company president Ian Anderson recently told reporters there is a significant security plan being put in place.

This is probably a good idea. The company should be preparing for everything and anything.

The environmental movement is better organized and better financed than it ever has been. It also believes that concerns by average citizens over climate change have helped to expand its support base to new heights. This, in turn, appears to have given climate activists licence to turn the heat up on governments any way they can.

Mr. Trudeau would be well advised to monitor events taking place in North Dakota. He could be dealing with a similar crisis closer to home in the not-too-distant future. 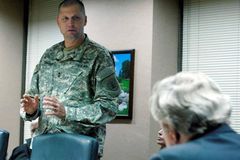 Alternative routes for Dakota Access pipeline under review: Obama
November 2, 2016
Follow Gary Mason on Twitter @garymasonglobe
Report an error Editorial code of conduct
Due to technical reasons, we have temporarily removed commenting from our articles. We hope to have this fixed soon. Thank you for your patience. If you are looking to give feedback on our new site, please send it along to feedback@globeandmail.com. If you want to write a letter to the editor, please forward to letters@globeandmail.com.
Comments