Every day around the world, a thousand women die during pregnancy and childbirth - usually from preventable causes. The tragedy doesn't end there, because half their children under 5 will also die soon after they do. Developed nations have thrown hundreds of millions of dollars at the problem, yet progress has been non-existent - until now.

For the first time ever, maternal deaths are in sharp decline, according to a new report published in The Lancet. Until now, the commonly accepted figure for maternal deaths has been around 530,000 a year. The new estimate is around 342,000 deaths. No one knows the real extent of the decline, because earlier statistics are highly unreliable. But it's clear that after decades of futile effort, something's finally going right.

Good news? Not for everyone. The Lancet's editor says a number of activist groups pressured him to delay publishing the study. Important conferences are coming up, and these groups are worried the good news will be bad news for their ability to wring more money out of international agencies and governments.

"People have long accused aid officials and advocates of being afraid of putting themselves out of business by success," comments William Easterly, the development critic. "But it's rare that such an episode is documented so clearly."

Aid groups aren't the only ones playing politics with dying mothers. Western politicians just can't help themselves. To hear them talk, maternal health boils down to contraception and abortion. U.S. politicians have spent decades in endless wrangles and policy reversals over whether or not to fund condom distribution in Africa.

Canadian politicians these days are no better.

Stephen Harper latched onto the maternal health issue to score easy political points, then blew it with bumbles and backpedalling over whether Canada would support contraceptive efforts. Not to be outdone, Michael Ignatieff warned Mr. Harper not to play "ideological games" with abortion, then played them himself. "We don't want to have women dying because of botched procedures," he emoted, implying that his opponent does. Even Hillary Clinton couldn't resist politicking with the A-word. "You cannot have maternal health without reproductive health," she lectured on a recent visit.

All this posturing, so breathlessly dissected in the media, is aimed at the home-town crowd, of course. None of it will ever have the slightest impact on any woman in India or Uganda. Nor will it influence the international policy approach to maternal health, which has been in place for years. This policy is to encourage contraception, and to support women's access to safe abortions in those countries where it is legal. This has been Canada's policy for years, and no doubt will remain so, despite the phony moral righteousness on all sides.

Few politicians have any interest in the many other factors that influence maternal health. Now the Lancet research sheds some better light. Rising income - which improves nutrition and access to health care - is probably the biggest single factor of them all. Better education matters too. Having "skilled attendants" - people with some medical training - on hand during a birth also cuts maternal deaths. India and China, because of rising prosperity, have made enormous strides in cutting death rates. But eastern and southern Africa have not, largely because AIDS kills 60,000 pregnant women every year. The biggest problem there isn't access to obstetrical care, but access to antiretrovirals. In South Africa, ignorance about HIV and AIDS is still a serious problem, largely because of a regime that for years promoted beetroot and garlic as a means of fighting HIV infection.

Now that we have the first signs of progress, how can we build on them? Aid agencies could do us a favour by analyzing the evidence, not trying to bury it. And politicians could stop grandstanding. Access to contraception and abortion is only one of many complex factors that determine the difference between life and death for the world's most vulnerable people. To distort their tragedy for political advantage is simply nauseating. 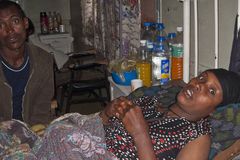