At first there was a sense of relief in the capital in learning that the baseball diamond shooting wasn't perpetrated by a Muslim or Islamic State connected. The shooter's name, James Hodgkinson, told that story.

He was probably some deranged man wanting to go out in a blaze of hell and fury. But then the news started coming that he was a strident political partisan, that he hated Donald Trump, that he was a backer of Bernie Sanders.

If that's true, the shootings take on potentially dire significance. American political partisanship between Republicans and Democrats has been ratcheting up brutally over the years, but it hadn't reached the point of gunfire terror.

Now it is here and while there's hope the shootings are a one-off deal, there's also the possibility that they will touch off a wave of political animus that will see more of the insane same.

The way both sides reacted in Congress, reaching out to one another as is often the case after tragic occurrences, offered a note of encouragement. President Donald Trump struck a unifying tone as well with his initial measured reaction. But that was before much news about the shooter's political leanings was out. One Facebook post from James Hodgkinson read, "Trump is a Traitor. Trump Has Destroyed Our Democracy. It's Time to Destroy Trump & Co."

Is this the type of president who will view that kind of vitriol with equanimity? Mr. Trump has been portraying himself as a victim of political witch hunts. What better proof of opponents out to get him than Republicans being shot at on a baseball field on Washington's perimeter?

Should he wish, the shootings give Mr. Trump cover – "Our party is under siege" – to go the authoritarian route, taking the law in his own paws as leaders of his narcissistic domineering temperament are wont to do.

This week we saw one of the President's associates float the possibility that the President would fire Robert Mueller, the special counsel appointed to probe Russian collusion in the election. The reason offered was that Mr. Trump feels Mr. Mueller is politically biased in favour of fired FBI director James Comey. Mr. Mueller, in fact, is respected by all sides. But that's how far Mr. Trump would like to go if he feels he could get away with it. Events like the shootings help his cause.

Much is being written in this country about the middle being gone, about two cold-warring political solitudes. The governance of Mr. Trump, bent on entrenching the divide, is all about loyalty. This week at the first full meeting of his cabinet, his cabinet secretaries one by one fell at their feet delivering what he wanted – oaths of allegiance. Reince Priebus his chief of staff set the tone. "We thank you," he said, "for the opportunity and the blessing that you've given us to serve your agenda."

As for other agendas, radically different ones in this country of cocoons, there was California's liberal Governor Jerry Brown talking of his collaboration with China, after Mr. Trump's withdrawal of the U.S. from the Paris climate agreement, on climate change initiatives. "It is a little bold to talk about the China-California partnership as though we were a separate nation, but we are a separate nation. We're a state of mind."

The President stokes the antagonistic states of mind, as do the media. Unlike in the Watergate era when Richard Nixon could rightly chafe that he had little conservative media backing, now the country's fourth estate is carved into warring halves. Mr. Trump's exaggerations on being treated with hostility by the press find support not only at Fox News, but right-wing conspiracy sites such as Infowars and others. Rush Limbaughs are everywhere.

The gulf between the solitudes is broadened by the temperaments of Mr. Trump and Bernie Sanders, by widening right-left policy splits, by allegations of scandal threatening the President's job security.

At the baseball diamond, the states of minds got yet a further wrenching. Political partisanship has now reached the level of gun attacks. 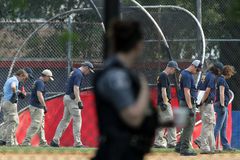