U.S. presidents don't have to be paranoid to be concerned about a permanent bureaucracy out to selfishly preserve its privileges and resist orders when a new administration takes over. But every now and then, paranoia gets the better of vindictive and insecure leaders and something akin to the siege mentality that has gripped the Trump White House results. It cannot end well.

At dawn on Saturday, U.S. President Donald Trump took to Twitter to exclaim: "Terrible! Just found out that Obama had my 'wires tapped' in Trump Tower just before the victory. Nothing found. This is McCarthyism!" More incendiary tweets followed – including one referring to former president Barack Obama as a "bad (or sick) guy" – without Mr. Trump offering a speck of evidence that his predecessor had ordered any such surveillance during the 2016 election campaign.

The world has grown wearily accustomed to Mr. Trump's puerile Twitter tantrums, making it tempting to dismiss this one as just more baseless lashing out, a tactic to monopolize the attention of cable news and stir up hate among the "forgotten people" who put him in office. But accusing Mr. Obama of a felony – no president can just order the surveillance of a U.S. citizen – is a new low for Mr. Trump that demonstrates the depth of his neurosis.

Not since former president Richard Nixon – who said, of forces within the U.S. government, that the "sons of bitches are out to screw us" – has Washington seen this level of crazy. No one was out to screw Mr. Nixon. Those who leaked details of his administration's involvement in the illegal break-in of Democratic Party offices and other abuses of power only wanted to protect U.S. democracy.

The Trump White House is similarly obsessed with leaks from within the government and intelligence community that forced his first National Security Adviser, Michael Flynn, to resign three weeks into the job and Attorney-General Jeff Sessions to recuse himself from overseeing a Justice Department investigation into Russian attempts to influence the country's election. Mr. Flynn resigned after it was revealed that he had lied about speaking to Russia's ambassador to the United States about sanctions Mr. Obama imposed just before leaving office. Mr. Sessions recused himself after admitting that he also spoke with the Russian ambassador during the election campaign – despite denying during his Senate confirmation hearings that any such communication had taken place.

U.S. intelligence agencies routinely monitor the communications of foreign diplomats and, hence, picked up details of Mr. Flynn's conversations with Russian Ambassador Sergey Kislyak. Someone leaked them to the media. That is very different from Mr. Obama ordering surveillance of Mr. Trump or anyone else. But the new President's conspiracy-wired brain can conjure delusions so grandiose as to make Designated Survivor look like a documentary.

To the Trump White House, the leaks prove the existence of a "deep state" – or state within the state – out to undermine the sitting President. For chief strategist Steve Bannon and his acolytes, the deep state must be dismantled if Mr. Trump is to realize his agenda of renewing American greatness through trade protectionism, the restoration of white Christian values and the neutralization of an intelligence community overtly hostile to Russia. This is what Mr. Bannon meant when he spoke recently about the "deconstruction of the administrative state."

Unfortunately for Mr. Bannon and Mr. Trump, the Justice Department investigation into Russian interference in the U.S. election will now be directed by a department official other than Mr. Sessions – probably a special prosecutor. That means it might actually go somewhere – somewhere that could produce more damaging revelations about ties between Trump campaign and administration officials and the Kremlin. It could even shed light on Mr. Trump's business dealings in Russia.

Maybe that is what really sparked the President's Twitter tantrum on Saturday morning. Mr. Nixon railed against "the sons of bitches" because he had a guilty conscience. It's not clear Mr. Trump has a conscience. Would anyone put it past him to blame any allegations that might arise out of the investigation on Mr. Obama, who (according to Breitbart types) is apparently directing the "silent coup" against him from his rented Georgetown mansion?

Mr. Trump modelled his campaign on Mr. Nixon's 1968 White House run. Predictably, his presidency seems to be heading in the same direction. 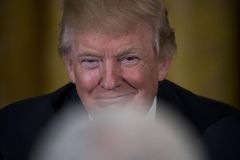