Lawrence MartinPublic affairs columnist
Special to The Globe and Mail
Published May 14, 2013 Updated May 11, 2018

What have we here? Are Canadian progressives finally cluing in?

About a decade ago, conservatives began building a new and impressive political infrastructure – something to carry their movement and ideas forward no matter who was in power.

Progressives, their heads in yestergear, sat sphinx-like. As Rick Smith, the new head of the Broadbent Institute, was noting the other day, they didn't see the need for something like a Manning Centre. They didn't grasp the need for new fundraising networks, new get-out-the-vote methods, social media expertise, training programs for activists and the like.

What was going on in the United States didn't faze them, either. There, progressives built a major support network that helped drive Barack Obama's rise to power. But liberals here failed to build bridges to the south the way Canadian conservatives did with their Republican counterparts.

As election results showed, the inertia proved costly. "We've been outorganized, outfought and outfunded," Mr. Smith noted. He holds the workings of the Manning Centre, created by Reform Party founder Preston Manning, in high regard and he's starting a push to mimic its methods.

The Broadbent Institute, viewed to date as a New Democratic front, is switching focus to the broader progressive cause, working not from a party point of view, but a policy and organizational one. As an example, in a few weeks, it will begin running training seminars across the country for political activists. They will pay a nominal fee for the type of instruction that young righties have been getting for years.

Next week, the Broadbenters are bringing to Ottawa the head honchos from the mother ship of U.S. progressive institutes, the Center for American Progress. With its $35-million budget, CAP is a huge support system for Democratic policies and political activity.

Mr. Smith, an experienced fundraiser who previously headed up Environmental Defence, took over at Broadbent in January from Kathleen Monk, who got the institute off the ground. Like Mr. Manning's group, he plans on releasing polling data to try and shape the media narrative. He is bringing in added personnel, but his funding is tiny compared to the CAP or the Manning Institute.

Unlike their counterparts on the right, Canadian progressives don't have a unified left to work with. Not only are they divided politically but there are a large number of what Mr. Smith calls "subtribes who've been at loggerheads."

The idea that groups like Broadbent, Canada 2020, Idle No More, the Centre for Policy Alternatives and labour and environment groups can work together is not something to bet on. But the building of a co-ordinated infrastructure is a long-term plan, not something just geared for the next election.

Among those coming to Ottawa next week is Matt Browne, a senior fellow at CAP who says there has to be more collaboration among these silos. Mr. Browne, a Brit, tried to get a big progressive think tank going in Canada seven or eight years ago with Michael MacMillan, then chairman of Alliance Atlantis. Their plans fell through and the well-heeled Mr. MacMillan decided instead to form a small organization, Samara, that seeks to increase political participation in Canada.

The hope is that Liberal Leader Justin Trudeau will spur the progressive movement the way Barack Obama did in the United States. There, a harsher form of conservatism under the presidency of George W. Bush helped mobilize progressives, and here, many see a harder form of conservatism with the potential to do the same. In the U.S., the question is whether Mr. Obama created the wave or rode it, said Mr. Browne. Either way, for Canadian progressives, the importance of bringing political organization into the modern era cannot be doubted.

Pointing to the political inroads made by Canadian conservatives, Mr. Smith noted that there is no lack of incentive. "Progressives here are concerned that the country is being remade right underneath their feet."

Opinion
Trudeau has seduced us, but now must consummate the marriage with NDP and voters
May 11, 2018 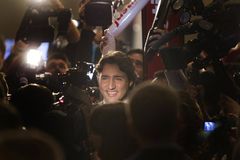 With three strong party leaders, Ottawa is about to get interesting
May 11, 2018