Preston Manning is the founder of the Manning Centre

The charges pertain to corruption, bribery, fraud, and conspiracy in connection with what? Infrastructure spending. In particular, the financing of municipal water and sewer systems as part of a multi-billion dollar commitment to infrastructure spending announced with great fanfare by Liberal premier Jean Charest in the mid-2000s.

Less than two years before the sun began to rise on the political fortunes of federal Liberal leader Justin Trudeau, the sun was setting on the political career of former Ontario Liberal premier Dalton McGuinty; his resignation as premier accelerated by a scandal. A scandal involving what? Once again, you guessed it – infrastructure spending.

In this case, "green infrastructure spending" – the hasty awarding of contracts for the construction of gas-fired electricity plants to replace coal-fired facilities at enormous costs, not fully disclosed, to the taxpayers of Ontario. Most readers probably recall alleged attempts by Liberal staff to erase evidence of the scandal from computer hard drives.

Fast forward to last week's federal budget and we find promises to spend $60-billion in new money on infrastructure of all kinds – transportation, green infrastructure, social infrastructure and improving utility services and housing on aboriginal reserves.

Canadians should take a moment to reflect on a fundamental truth concerning government spending: Of all the expenditures governments make on our behalf, infrastructure spending is probably the most susceptible to political corruption and manipulation for partisan political purposes.

Regrettably, this is both an old and recurring story.

For example, the first major federal infrastructure project undertaken in this country – the construction of the CPR transcontinental railway – became tainted by corruption when John A. Macdonald, our first prime minister, accepted a bribe from the developers. Today's Prime Minister has before him a daily reminder of this incident – the building that houses his executive offices, the Langevin Block, is named after Hector Langevin, Macdonald's public works minister, who was also involved in the bribe-taking.

How does infrastructure spending become so easily corrupted? Note what Quebec municipal affairs department officials told the Charbonneau inquiry into political corruption in that province. Their initial instructions were to ascertain from competitive bids which firms offered "the best solution for the best price" for improved water and sewage handling facilities in various municipalities. They were to make recommendations as to which firms should get contracts on the basis of objective engineering and economic criteria. But then their recommendations were sent to the minster's office where "political criteria" were applied, and that was where the corruption, bribery, fraud, and conspiracy allegedly entered the system.

What might the application of "political criteria" to infrastructure spending mean at the federal level?

It can mean that applications and requests for infrastructure funding from this province or that municipality are awarded, at least in part, on how supportive that premier or mayor may be of the federal government and its agenda. Does a federal cabinet minister or MP need a political boost (once the honeymoon is over) in his or her riding? Well, give that riding an infrastructure project. Does a major donor or supporting company need to be rewarded for partisan support? Well, just give them a cost plus infrastructure contract and that should keep them happy and loyal.

What can be done to keep the federal Liberals proposed infrastructure investments from being corrupted in this way? The insistence on openness and transparency with respect to decision-making contained in the "mandate letters" of the infrastructure, transportation and public services ministers is a good start – but more needs to be done.

Civil servant whistleblowers must be encouraged to come forward when they see objective infrastructure recommendations being overridden by "political criteria." Further, think tanks, taxpayer advocacy groups and opposition parties should closely monitor federal infrastructure decisions and projects, watching for and publicizing any and all infrastructure spending irregularities.

As the Liberal politicians in Quebec now being charged as a result of the Charbonneau inquiry are discovering, the patronage chickens eventually come home to roost.

It's better for everyone to co-operate in ensuring that federal infrastructure spending does not become corrupted in the first place, than it is to try to redress the problem down the road and after the fact.

Federal spending surge must be guided by smart planning and execution
May 16, 2018

Opinion
Provinces will feel the bite when it comes to health care transfers
May 16, 2018 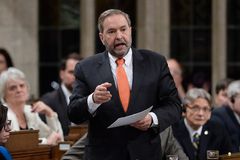