Try as they might – and they will try – Canada's premiers have no hope of squeezing an additional penny from Prime Minister Stephen Harper's government.

The premiers can moan all they want about a "fiscal imbalance," with a federal surplus now in place while many provincial governments wrestle with deficits. Cry me a river, the Harper government will say. We cut our spending; now you do the same. We want the surplus for our political purposes – tax cuts and targeted spending – before the next federal election.

If you believe the Parliamentary Budget Officer, the premiers have a point – sort of. In a report last year, the PBO looked ahead and suggested that Ottawa's finances would be in good shape (barring sharp economic downturns), with surpluses ahead, whereas provincial finances would be shaky (except for the fossil-fuel-producing provinces).

Provinces deliver very costly services, none more so than health care. With the expiration of the 2004 10-year health accord, extended for three years, Ottawa's transfers will soon fall from being indexed at 6 per cent to something in the 3-to-4 per cent range. The drop doesn't sound like much, but it's a multibillion-dollar loss for the provinces.

Naturally, many premiers (and the federal New Democrats) would like to return to the old 6-per-cent formula. Some premiers would like to see a new formula that takes aging into account, since some provinces have populations with a faster-growing share of older citizens. The new Conservative formula, based on per capita transfers, benefits Alberta but hurts the Atlantic provinces.

But a return to 6-per-cent indexing would be among the worst decisions imaginable for health care. We've been there and all that kind of money did was inflate salaries for doctors, nurses and administrators.

Since 2011, health-care costs have been rising nationally at an affordable 2 to 2.5 per cent a year, (not 3 to 5 per cent as PEI Premier Robert Ghiz stated at the recent premiers' conference in Charlottetown). Injecting vast new sums into health care would impede hard decisions, slow reform and make already well-paid providers even better off.

The provinces' challenge, however, goes well beyond health care. Along with municipal governments, they provide a host of very labour-intensive and costly services: education, welfare, policing, justice.

They will need hefty revenue increases to finance the future delivery of these services to an aging population. The same aging population – the so-called "old-age dependency factor" – has led the PBO to predict much slower per capita growth for the next three decades.

The PBO estimates that per capita GDP will be $14,000 less in the next three decades than if growth had continued at the rate of the previous three decades. Fewer people will be working to support many more who are not, increasing pressure on government spending and depressing growth in government revenues.

Of all the long-term pressures facing governments, this incremental but relentless and inescapable change will shape public finances, challenge the delivery of today's programs and make it extremely difficult to hold taxes steady. The provinces, with all the programs, will feel the pressure more than Ottawa.

Today, we get an inkling of what is to come. Ontario and Quebec are both in deficit – Ontario more than Quebec, although Quebec has a larger debt load. (Ontario's is growing.) Both provincial governments are committed to balancing their budgets. Both are telling employees not to expect wage increases, and will be trying to scale back on public-sector employees.

That's the message Quebec Premier Philippe Couillard is reported to have delivered to all the leaders of the Quebec public service last week. It's the message Ontario Premier Kathleen Wynne has been trying to get public-sector unions to accept. It's the message underpinning the British Columbia government's position toward that province's teachers.

Even if provinces can reach fiscal balance, as B.C. has, the demographic pressure of aging will keep pounding their finances. Naturally, they will individually and collectively demand that Ottawa offer help.

They waited in vain. 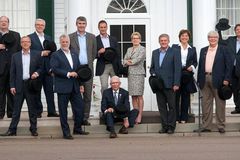