North Korea conducted its sixth nuclear test Sunday in its latest show of defiance to the international community after firing a conventional missile over Japan earlier this week. The test, the first since Donald Trump took office in January, is a dramatic escalation of political pressures in the peninsula, and the U.S. President may soon be facing his first major foreign-policy crisis if Pyongyang's provocations continue.

The explosion gave yield to a magnitude 6.3 earthquake, and South Korea's meteorological administration estimates the blast yield at between 50 to 60 kilotons, around five to six times stronger than North Korea's fifth test in September last year. This raises the stakes further after a host of developments in recent weeks, including military drills last month involving U.S. and South Korean troops; Pyongyang's threat to fire missiles at the U.S. territory of Guam; and the launch in July by the regime of two intercontinental ballistic missiles, which reportedly had the range to reach the U.S. mainland.

Read more: North Korea's missiles: What's happened so far, and what could happen next

The test offers more evidence that North Korea is moving closer to developing a nuclear warhead capable of being fitted onto an intercontinental ballistic missile that can strike the U.S., let alone key allies like Japan or South Korea in much closer proximity. With the U.S. homeland looking increasingly vulnerable, Trump and his allies in the region want to build international pressure following the UN Security Council resolution passed last month which banned mineral and seafood exports worth some $1-billion to the regime.

Coinciding with this sanctions diplomacy, the United States and South Korea conducted their latest tests in July of the Terminal High Altitude Area Defense (THAAD) missile system. Condemned by North Korea, China and Russia, THAAD is being deployed by Washington in South Korea as a means to potentially intercept missiles launched by the regime.

The latest Pyongyang provocations, alongside recent U.S. rhetoric, has given the international community heightened concerns that Donald Trump might now be thinking, much more seriously, about a pre-emptive strike on Pyongyang's nuclear capabilities. The President has already condemned the test on Twitter as "very hostile and dangerous to the United States," and that "talk of appeasement with North Korea will not work, they only understand one thing!"

A few weeks ago, Mr. Trump asserted that the North Korean regime "is behaving in a very dangerous manner, and something will have to be done about it…and probably dealt with rapidly."

While Washington's next steps are not crystal clear, the two-decades-long U.S policy of "strategic patience" towards Pyongyang is now over with all options on the table. Aside from military force, which Mr. Trump has threatened with his "fire and fury" and "locked and loaded" rhetoric, scenarios range from a new round of peace talks at the dovish end of the spectrum, to more hawkish actions like interdicting ships suspected of selling North Korea weapons abroad, one of the regime's key sources of income.

However, Washington knows it would be wise to try to bring other parties, especially Beijing, on board for any intensified package of measures. Yet, beyond key regional allies like Tokyo and Seoul, others – especially Beijing – have so far been reluctant to take more comprehensive, sweeping measures.

To be sure, China has taken some unilateral actions to tighten the screws on North Korea, including banning all coal imports into the country in February. However, it has reservations about squeezing its neighbour too much harder.

A key reason Beijing has differed with Washington over the scope and severity of actions against Pyongyang largely reflects the fact that it does not want to push the regime so hard that it becomes significantly destabilized. From the vantage point of Chinese officials, this risks North Korea behaving even more unpredictably, and the outside possibility of the implosion of the regime.

This would not be in Beijing's interests for at least two considerations. Firstly, if the Communist regime in Pyongyang falls, it could undermine the legitimacy of the Chinese Communist Party – its regional ally – too. In addition, Beijing fears that the collapse of order in North Korea could lead to instability on the North Korea-China border, a potentially large influx of refugees that it would need to manage, and ultimately the potential emergence of a pro-U.S. successor state.

Tensions will only rise further in the peninsula following the latest nuclear test. Mr. Trump may soon face his first major foreign-policy crisis, and needs very quickly to make some big decisions on how to tackle Pyongyang's provocations. 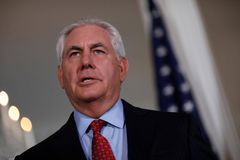