OMER AZIZ and MURTAZA HUSSAIN
Contributed to The Globe and Mail
Published December 18, 2013 Updated May 11, 2018

There was much euphoria around the Middle East when FIFA announced in 2010 that Qatar would be the host of the 2022 World Cup. It was the first time an Arab state was slated to host the event, a remarkable accomplishment when one considers the Middle East's obsession with all things football.

But all of the excitement over Qatar's hosting, there is a darker side to this story. When one thinks of Qatar today, the image of a tiny modernizing kingdom influencing everything from the civil war in Syria to the political situation in Egypt comes to mind. The jerseys of FC Barcelona, one of the most popular football teams in Europe, proudly burnish Qatar's name. The country's $100-billion sovereign wealth fund has large stakes in everything from Porsche to Harrod's, the luxury UK retailer. What is often hushed or ignored in this narrative is that Qatar and its fellow Gulf states are practicing a form of modern slavery in their exploitation and abuse of migrant workers.

With only 225,000 citizens and a population of 1.7 million, Qatar has the highest ratio of migrant workers to citizens in the entire Gulf. Workers from Bangladesh, Nepal, India, Pakistan, Sri Lanka, and the Philippines pour in by the thousands to work difficult construction and manual labour jobs. In return, they receive petty wages, work in dangerous conditions in the blistering desert heart, and sleep in small, squalid dormitories. Migrant workers come under the legal purview of the kafala system, which makes an employer legally responsible for his (and it is always a 'he') workers. While this may seem encouraging in theory, in practice workers are unable to leave the country or change jobs without their sponsor company's permission and employers have been known to withhold wages and confiscate passports.

This legal framework is reinforced by a widespread cultural acceptance of the practice. "We need slaves to build monuments. Look who built the pyramids, they were slaves." This was how one Iraqi expatriate in Dubai justified the deplorable treatment of Asian workers living in that Emirate. Sadly, such attitudes would appear to be not uncommon among those who have benefitted from the economic boom in the region over the past decades. What seems like simple employment on the surface is in actuality a modern form of enslavement; leaving migrant workers as the mere property of their employers.

A report by the British newspaper The Guardian this year revealed that migrant workers from Nepal died throughout the summer at a rate of one per day. Evidence of forced labour and extreme dehydration accompanied the allegations. Nepal's Ambassador to Qatar even went so far as to describe the country as an "open jail" as 44 migrant workers – mainly young men – died this summer, the causes unknown but many of them suspiciously attributed to 'heart failure.' The International Trade Union Confederation estimates that 4,000 migrant workers will perish before a single ball is kicked.

Across the entire Gulf, videos have surfaced showing Asian and African migrants being brutally beaten by their Arab employers, acts which governments have expressed reluctance to investigate or have outright dismissed. In one particularly horrific video, a Saudi family appears to take turns beating their Ethiopian domestic worker as she is suspended from a ceiling. None of these incidences are atypical for migrants in the Gulf.

The 2022 World Cup in Qatar has provided a rare opportunity to bring global scrutiny to this disgraceful situation. Amnesty International has said that migrants involved in preparing for the event have been "treated like cattle" by their employers. Furthermore, many have suffered serious injuries due to poor safety standards at construction sites. The mortality rate among workers has been described as 'significant'. In the words of Amnesty secretary-general Salil Shetty:

It is simply inexcusable in one of the richest countries in the world, that so many migrant workers are being ruthlessly exploited, deprived of their pay and left struggling to survive...FIFA has a duty to send a strong public message that it will not tolerate human rights abuses on construction projects related to the World Cup.

Indeed, given that the countries in which the most grotesque abuses occur happen to be close Western allies, it behooves Western countries to not turn a blind eye to these injustices. The mistreatment of migrants in the Gulf has often been viewed as too politically sensitive an issue to confront by Western politicians, eager as they are to maintain good relations with the oil-rich monarchies in the region. Poor and disenfranchised workers, often illiterate, quite simply do not have the resources to make their voice heard to the world on their own.

While the physical infrastructure of the Gulf may have progressed to 21st century modernity, labour and human rights standards still lag far behind. Hosting a world event such as FIFA 2022 should be conditioned on the just treatment of the workers building the sporting venues affluent fans will be frequenting.

Like the plantations in the American south which exploited thousands of black men, women, and children at the lash of the whip, the modern day slaves toiling the Gulf are denied not just the right to gainful employment but something far more fundamental: the basic dignity that makes one human. "It is the job of thinking people," Albert Camus reminded us, "not to be on the side of the executioners." It is also the job of Western nations not to be on the side of slaveowners, and to speak out and demand the just treatment of those who will be making their enjoyment of FIFA 2022 possible.

Omer Aziz (@omeraziz12) is a journalist and affiliate of the Woodrow Wilson Center; Murtaza Hussain (@mazmhussain) is a columnist for Al Jazeera English.

A yellow card for FIFA reforms Subscriber content
May 11, 2018 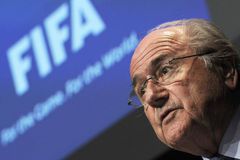 The epicentre of world energy moves out of Middle East Subscriber content
May 11, 2018