The phrase used most often in Quebec's proposed Charter of Values is "a public body." It's meant to refer to a government bureau, but after you've read it several times, it starts to sound like what the law is supposed to control: The public presentation of a human body, with or without veil, turban or kippah.

Public bodies, in that sense, have been at issue this fall elsewhere in Quebec, where Yum Yum Chips revived its "Little Indian" logo from the sixties, and where the Montreal Museum of Fine Arts hastily withdrew its support from a fashion and furnishings line that included a key-ring puppet the manufacturer calls a "squaw doll." The caricatured bodies of Native people are still selling products and representing sports teams, and we're still arguing about whether this or that logo is an innocuous tradition or a golliwog of a different hue.

The debate rages in many places, including football fields in Cleveland – home of the Indians' grinning, red-faced Chief Wahoo – and Washington, D.C, where the Redskins are under growing pressure to change the team's name and logo. But the discussion has a sharper inflection in Quebec, where many see the Charter of Values not so much as a guarantor of the state's religious neutrality but as a way of defining one standard of public-body presentation as normal. Racial caricature does the same thing in reverse, by showing that the group caricatured is "not us," and not able to resist.

Yum Yum's Little Indian came back as "a vintage treat for the Holidays," and parent company Krispy Kernels claims to be surprised at the ruckus that has ensued. "[The logo] bears witness to our roots and origins," says a company statement, which points out that its founder had indigenous ancestry. "[It's] a nostalgic look at our history, but also an opportunity to revive the memory of our customers." In other words, the logo and all its meanings are about the company and the product, not the peoples it parodies.

Montreal designer Nathalie Benarroch, whose Inukt line was ejected from the MMFA gift shop one day after First Nations complaints were written up in the Montreal Gazette, says she was trying to pay homage to indigenous cultures, uses First Nations suppliers for some of her items, and was attacked only because she has no aboriginal ancestry. "By this logic," she wrote later in the Gazette, "should people not have accepted Julia Child writing about French cuisine because she wasn't French?" But Child didn't engage in a wild mash-up of someone else's traditions the way Bennaroch did, printing (for instance) an Edward Curtis photo of a western Native leader (Hinmatóowyalahtq̓it, or Chief Joseph) on an upholstered chair front and the slogan "I am Inuk and my heart is free!" on the back. The implication was that indigenous cultural symbols are interchangeable and belong to everyone, which struck many First Nations people as equivalent to saying they belong to no one.

"I am annoyed beyond belief by Ms. Benarroch's total refusal to actually listen to the concerns of indigenous people while claiming to honour them – a common refrain among so many people engaged in cultural misappropration," writes Chelsea Vowel, a Michif (Métis) writer and lawyer who lives in Montreal, in a much-circulated blog analysis of Inukt. Ms. Vowel calls Inukt's "Nayeli" key-fob caricature of an aboriginal girl "frankly racist, even if it comes from a reserve" – the Wendake Wyandot reserve, north of Quebec City, where Bastien Industries markets the figure as a "squaw doll".

In the U.S., any logo or name that "may disparage or bring into contempt or disrepute persons, institutions, beliefs or national symbols" can be refused protection under trademark law – sometimes in paradoxical ways. When a group of Asian-American musicians tried to claim copyright for their band name The Slants, the Trademark Office refused the application, saying that using "slants" to describe musicians of Asian descent constitutes disparagement of all Asian-Americans. Never mind that the band was trying to defuse and reclaim the word, just as gay and lesbian activists have done with "queer."

"I was denied because of my race," writes bassist Simon Tam in a blog post about the incident. "No other trademark application on the term 'slant' has been refused for racism until now (there have been nearly 800). The term has never been considered to be a racial slur by the trademark office until an Asian applied."

That's the thing about having a public body: it doesn't belong just to you. Other people may claim a say in what it can wear, or be called, or how it can represented in a word or picture, though they may not always have the last word. In September, in Ontario, the Nepean Redskins decided they will play football under another name, after a human rights complaint lodged by Ian Campeau, an Anishinaabe (Ojibwe) musician. Mr. Campeau (aka DJ NDN) is a member of A Tribe Called Red, whose name seems even more resonant now, as a sign of calling out past disparagements, and of taking back the language used to disparage.

Opinion
How Quebec’s charter turned the Tories into ethnic champions
May 11, 2018 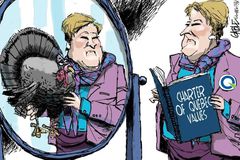 Opinion
Canada’s future depends on a new deal with First Nations
May 11, 2018

Opinion
In Quebec, the politics of cultural despair
May 7, 2018

Opinion
The worrisome tone of Quebec’s values rhetoric
May 11, 2018 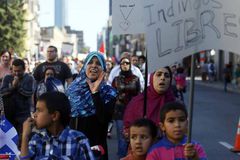