Those who don't follow Quebec affairs are missing a lot.

There's plenty of interesting stuff going on: the commission into massive corruption in and around Montreal's municipal governance; the first-place positioning of the Montreal Canadiens; the continuing success of Quebec films; and lots of other headline-grabbing developments.

And then there's secession. The governing Parti Québécois can't give it up as an ambition, and can't stop talking about it as a result. Every chance the PQ has, it picks a fight with Ottawa, with the same tired refrain about everything's being Ottawa's fault and how much better off economically Quebec would be if only it left Canada. And, oh yes, let's tighten those language laws, again.

The rhetoric, the affirmations, the contortions, the fears about the decline of French, the perfidy of whichever party governs in Ottawa – nothing has changed in four decades except the personalities, who, these days, are much less arresting than, say, René Lévesque, Jacques Parizeau (in his prime) and Lucien Bouchard. Listening to the current crop suggests a group that hasn't had a new idea in a very long time, and isn't likely to discover one any time soon.

Which might, in part, explain why Quebeckers seem so bored by what the PQ is peddling. A CROP-La Presse poll recently asked Quebeckers how they'd vote in a referendum on sovereignty. Thirty per cent said Yes, 59 per cent said No, and 11 per cent were undecided. Apportioning the undecided to the two camps produced 34 per cent for Yes and 66 per cent for No.

Think about those numbers. The PQ has been promoting its plan to take Quebec out of Canada – with all sorts of contorted explanations about continuing links – for four decades. Forty years of effort, propagandizing, battles with Ottawa, visions painted in the sky, budgets for Year One, massive use of government funds, media elements highly supportive, an intellectual class largely favourable – yet, support today is less than in the 1980 referendum when 40.4 per cent voted Yes to a convoluted question about "sovereignty-association," and far less than in the 1995 referendum when 49.4 per cent backed what the PQ offered.

Equally upsetting for the PQ is that its share of the popular vote is no higher than when it squeaked into office last year, despite the opposition Liberals' search for a new leader to replace Jean Charest. Even the existence of the tone-deaf (toward Quebec) Harper government hasn't lifted PQ fortunes, despite persistent PQ efforts to take a run at Ottawa.

If anything, the PQ has demonstrated an "amateur night at the fair" quality best exemplified by the Higher Education Summit that laboured and brought forth a mouse: a student fee increase tied to inflation, the kind of solution that pleased few and settled nothing. Quebec universities will continue to be seriously underfunded.

Then there was Premier Pauline Marois's trip to Edinburgh, where, instead of receiving a warm welcome from Scottish secessionists, she got the bum's rush, because whatever Scots might think of being in the U.K., they like Canada very much, thank you.

All of which leads to a question for the federal NDP: Whatever possessed the party, which is supposed to have its ear to the ground in Quebec, to suggest reopening the Clarity Act, which is all about the ground rules and sundry assumptions surrounding a referendum that isn't on the horizon and bores most Quebeckers to tears?

Here was a distraction of the first order, presumably designed to keep steady some of the strong nationalists (bordering on outright secessionists) who lurk in the NDP coalition and caucus. An NDP MP from Quebec bolted anyway to the Bloc Québécois. Most commentators in Quebec – except for the handful who love this stuff – figured the NDP gesture was somewhere between bizarre and futile, whereas the reaction was fiercely hostile outside the province.

This stratagem proved to be a lose-lose for the NDP, as could easily have been predicted. It was one thing for another party to spring a trap to expose divisions in the NDP; it was quite another for the NDP to spring one on itself.

One NDP MP, Claude Patry, has moved to the Bloc Québécois since the 2011 election, not two, as incorrectly stated in the original print and earlier online versions of this column. 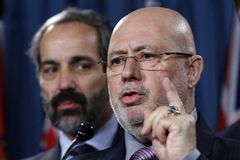 Tory claim of NDP’s sovereigntist sympathies gets new boost with MP's defection to Bloc Québécois
May 11, 2018 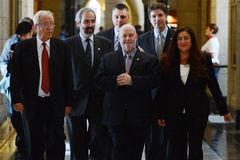 Underdogs in Quebec Liberal race may join forces to defeat front-runner
May 11, 2018 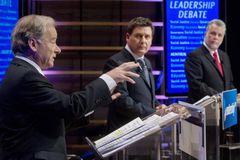