Patrick Lagacé is a columnist for Montreal's La Presse.

Hey guys, did you hear about the 9/11 terrorists? They transited through Canada before striking the United States. It's a fact. They came through Nova Scotia before they attacked New York and Washington.

In fact, what I just wrote is clearly false, as any Canadian knows.

Despite the fact that it is false – none of the 9/11 terrorists used Canada as a conduit to get into the U.S. – it is stated as fact from time to time in the United States, sometimes by high-profile politicians.

For obvious reasons, Canadian officials did and continue to do their best to set the record straight. First, it's false. Second, it gives the impression that the "greatest undefended border in the world" is more of a liability than the asset that it is.

Let me ask you, my English-Canadian friends: When our elected officials protest this urban legend of 9/11 terrorists travelling through Canada before striking the U.S., are they thin-skinned?

What is 'fake news,' and how can you spot it? Try our quiz

When British Prime Minister David Cameron lambasted Fox News in 2015 for falsely stating that the English city of Birmingham was a "totally Muslim" no-go zone, was he being thin-skinned? What about citizens who were equally appalled by the report?

I think it's fair to say that most people hate it when falsehoods are circulated about them, and it doesn't matter whether or not they are Canadian, British or … Québécois.

By the way, I'm the guy who penned a column in Montreal's La Presse semi-defending Andrew Potter in the wake of his now infamous – and semi-repudiated – Maclean's column about Quebec's supposed ingrained alienation. It's been said that Prof. Potter was a victim of tribal politics. Please allow me, as a member of the Quebec tribe, to reflect on this weird saga. I semi-supported Prof. Potter, saying his column was more of a brain fart than a genuine attack on Quebec society – the sort of which we've seen before (more on those later).

Prof. Potter had great column material in his hands when he offered quantified data pointing to a distinct Quebec deficit in what sociologists call "social capital" compared to other provinces. Just with that, Prof. Potter had fodder to spark a provocative and pertinent debate in this province. He chose, alas, to pepper his piece with dumb anecdotes that do not stand up to scrutiny if you've lived here for a while, like the statement that it is common for restaurants in Montreal to offer two sets of bills, or that doctors routinely ask to be paid in cash, or that ATM machines regularly churn out $50 bills.

Now, the canards that Maclean's published (without serious vetting) do not amount to libels that the 9/11 terrorists moved through Canada before murdering thousands of people, or that British cities are forbidden territories for non-Muslims. But they are falsehoods nonetheless, and I'd say that's why it angered so many people in Quebec, and that's why it outraged Québécois of all linguistic backgrounds; anglo Montrealers were the first to shoot warning shots across the magazine's bow, not just the nationalist brigades.

A fact is a fact, and the fact that people are up in arms when falsehoods about them are thrown around is not proof that said people are thin-skinned. Let me put it this way: You can say that poutine is a sorry excuse for a symbol of one's national gastronomy. But please don't say that paella is Quebec's national culinary symbol – that's false. (Poutine is delicious, by the way.)

Let me say this about Quebec-bashing: Misinformed comment in the English-Canadian commentariat does exist and it has a rich tradition, and I'd venture that maybe that's why people here react a bit strongly when falsehoods are circulated about Quebec.

Remember Mordecai Richler's Nazi falsehood about the PQ's victory rally in 1976? Lots of people here certainly remember: The great Montreal writer, no friend of Quebec sovereignty, wrote in the Atlantic in 1977 that Parti Québécois supporters sang a Nazi youth anthem, Tomorrow Belongs to Me. That was false. People did sing a song called Demain nous appartient, which had nothing to do with Hitler: It was a catchy contemporary pop song. Maybe those who were offended to be equated with Nazis were thin-skinned.

Remember Jan Wong? When an armed loser barged into Montreal's Dawson College in 2006, shooting at everyone in sight, Ms. Wong wrote in The Globe and Mail that the Dawson shooter, like the Concordia shooter in 1992 and the 1989 École Polytechnique shooter, were all either immigrants or sons of immigrants, and that this somehow was proof that Bill 101's language protections produced such a deep alienation in the lives of immigrants that they turned against Quebec by shooting up schools – a strange and factless theory that generated condemnation even among staunch Quebec federalists.

These are just two examples of gloriously misinformed commentary about Quebec generated in English Canada. Maybe you, my English-Canadian friends, forgot about them. We in Quebec did not. You can call it being thin-skinned if you'd like. Then I'll call you Adolf, and we'll see how thin-skinned you are. 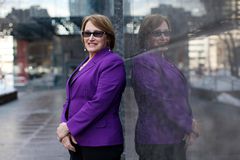