Quebec's effortlessly ambidextrous voters are showing off again. Some people who backed the Bloc Québécois until the final days of the 2011 federal election campaign before switching to the New Democrats are now flirting with marking a ballot for Justin Trudeau's Liberals.

For these voters, party labels are a minor detail in the context of removing Stephen Harper from office. It's not that they're in love with Mr. Trudeau, even if they concede he seems quite likeable. Nor have they forgotten the sponsorship scandal or the constant federal-provincial bickering that went on when the Liberals were last in power in Ottawa. They're skeptical of Mr. Trudeau's readiness, doubt he will keep all of his promises, such as restoring the budget of Radio-Canada, and apprehend renewed Liberal attempts to centralize power and dictate national standards.

So focused are these voters on defeating Mr. Harper, however, that they're willing to look past the apparent contradiction of voting for a party they once despised as much as they now detest the Conservatives. If Mr. Trudeau seems more amiable than his father, no one doubts that he is Pierre Trudeau's son in one respect: He has a zero accommodation policy toward Quebec nationalism and is unyielding in the face of the province's traditional demands for recognition. But that hardly seems to matter much when constitutional reform is a non-starter, anyway.

Just how many of these politically double-jointed Quebeckers exist is hard to tell. Several opinion polls show a sharp increase in Liberal support in the province at the expense of the New Democratic Party, which drew most of its supporters in 2011 from the Bloc Québécois. Anecdotally, the number of people who say they intend to vote Liberal for the first time in their lives also seems to be rising.

The extent to which Bloc Leader Gilles Duceppe has been attacking Mr. Trudeau suggests the two parties are vying for the same NDP drifters. Mr. Duceppe has savaged Mr. Trudeau's description of the sale of Canadian-built light-armoured vehicles to Saudi Arabia, which the Liberal Leader would uphold, as simply a contract for "jeeps." Mr. Duceppe has ripped into the Liberals for holding the same (conditionally favourable) position as the NDP on the niqab and on the Energy East pipeline, the issues that have caused New Democrats the most grief in the province where religious accommodation and the oil sands face the stiffest resistance.

A Léger poll conducted last week for The Globe and Mail showed the Liberals' renewed strength in Quebec mostly reflects its success in winning back non-francophone voters from the NDP. To the extent those voters are concentrated in the Greater Montreal area, Mr. Trudeau's party would retake seats in the region that it lost to the NDP in 2011.

Still, the Léger numbers also showed a jump in Liberal support among francophone voters. It might be even higher now, given the fluidity in voter intentions and growing perception among Quebeckers of the Liberals as the party most likely to defeat the Conservatives. That could yield three- or even four-way races in some ridings outside Montreal.

Indeed, the Conservatives are also benefiting, albeit on a more regionally concentrated basis, from the same voter dexterity as the Liberals. Some former Bloc voters who switched to the NDP last time are now poised to back the Tories. Mr. Harper's full-throated opposition to the niqab has struck a chord. Where the Tories once attacked NDP Leader Tom Mulcair for defending the Islamic face covering, the party's latest French-language ads target Mr. Trudeau for being "totally disconnected from Quebec values."

But the Bloc insists the Tories don't deserve the anti-niqab vote. On Tout le monde en parle, the Sunday-night Radio-Canada talk show, Mr. Duceppe called the Harper government "hypocritical" and "opportunistic" for only now promising a law to ban the niqab at citizenship ceremonies. It had 10 years in office to act, Mr. Duceppe said. The Bloc wants to ban the niqab not only at citizenship ceremonies, but in the voting booth, too.

Mr. Duceppe has stopped short of encouraging Quebeckers who have turned up to vote at advanced polls wearing potato sacs, Halloween masks or ersatz niqabs on their heads in apparent acts of protest. He accused such individuals of disrespect – not for Muslims, but for democracy, by ridiculing the precious right to vote.

In Quebec, exercising that right may once again mean doing backflips on the way to the polling booth.

Mulcair maintains election a three-way race, regardless of polls
October 14, 2015 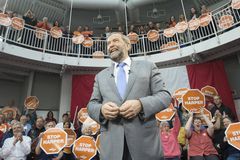 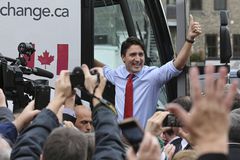