Rachel Dolezal, the now infamous civil rights activist, made headlines this week because she misled people about her race. She identifies as black, even though she is not of African-American descent. As a child she was a pale, straight-haired blonde, but today her hair is dark and tightly woven, and her skin is deeply tanned. At the age of five, she said, she "was drawing self-portraits with the brown crayon instead of the peach crayon."

Is feeling black enough to make you black?

The outraged answers came back loud and clear. No way.

"In my opinion, ethnicity isn't something one can really move in and out of physically or mentally," wrote Hillary Crosley Coker, who describes herself as a light-skinned black woman, on Jezebel. "You can fudge how people may see you ... but you're still born of your parents' racial makeup, and Rachel Dolezal's is Czech, Swedish, and German."

"This is a spectacular exercise in hubris, narcissism and deflection," thundered The New York Times's Charles Blow. "Changing appearance and even cross-cultural immersion doesn't alter the architecture of race that gave birth to and reinforced those differences in the first place.

"Some people have pointed to this strange case as an illustration that race is malleable. I submit that Ms. Dolezal is a reminder that it is not," wrote Tamara Winfrey Harris in the Times.

"A German lady got a weave," Jon Stewart mocked.

These are funny times. Anyone who substituted "gender" for "race," and said those things about Caitlyn (née Bruce) Jenner, would have been denounced from the rooftops as a hate-spewing bigot.

Instead, Ms. Jenner was lionized for her bold, courageous embrace of her true identity. No one dared accuse her (in the elite media, at any rate) of masquerading as a woman. Race may not be malleable, but obviously gender is. Enlightened people have decided that if a man feels like a woman, he's a woman.

Caitlyn Jenner wasn't out to deceive anyone, of course. She displayed her remarkable transformation on the cover of Vanity Fair. With her cinched waist and her dazzling new boobs, she was a perfect simulacrum of the sexist feminine ideal.

Don't get me wrong. We live in an age when people are free to construct their own identities, and that's not such a bad thing. As far as I'm concerned, people are entitled to self-identify as anything they want, so long as they don't hurt people. If Caitlyn Jenner believes she is a woman, fine. If Rachel Dolezal thinks she's black, that's her business – so long as she doesn't lie about her past. But it's another thing entirely to insist that the rest of us share their delusions. Race and sex are more than social constructs. They also are facts. And you can't change the facts the way you change your shirt.

We are deeply confused these days about what makes us who we are. It's now fashionable to believe that biology and genes don't matter, because the real forces that shape our reality are social and historical. Gender, for example, is no longer viewed as an inescapable biological fact, but is really an arbitrary product of our belief systems. Gender is highly malleable and fluid. The old, binary ways of thinking about gender are harmful, and should be abandoned. It is now common to refer to gender as something you were "assigned" at birth, not something you're stuck with. Gender is thought to be a choice – unless you were "assigned" to the wrong sex, as Ms. Jenner says she was, in which case you have no choice but to claim the one that destiny meant you to have.

Race, too, is often said to be a fiction. "It is ... a social construction based on culture and not biology," wrote Allyson Hobbs in The New York Times this week. Yet as a social construction, it is an awfully sturdy one. Race-fixation in the United States has seldom been greater than it is today – at least among the progressive left, where identity politics dominates the universities and the elite media.

Oddly, we seem to have arrived at a point where gender is fungible but race is not. This is curious, because "race" is a much looser concept than gender. There are millions of multiracial people in the world, of all different hues and genetic mixes. But nearly everyone on earth is biologically either male or female – no matter how they feel about it.

The trouble is that biology is like gravity. You can argue that it doesn't matter, but you can't stop the apple from falling downward off the tree. Biology isn't destiny, of course. But it is pretty darn determinative. It means a man can't have a period or a baby. It means that no matter what he does, he can't change his chromosomes from XY to XX.

Ethnicity, too, involves stuff you can't wish away or change. I inherited my ancestors' genetics, for better and for worse. Like other northern Europeans, I have the gene for lactose tolerance. I would desperately like to identify as tall and musically gifted, but, alas, I'm short and practically tone-deaf.

Of course we're products of our culture. And behaviour is quite malleable. But not everything is socially constructed, and feelings are sometimes different from reality, and we shouldn't be afraid of being labelled bigots if we say so. 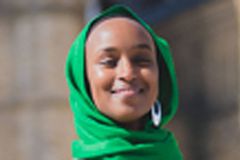