The London School of Economics has just opened its Centre for Women, Peace and Security, or, in less euphemistic terms, "the centre for why so many women are raped and tortured in war zones, and why so few people care about it."

Angelina Jolie, a vigilant crusader on this issue, attended the opening. It is the first think tank of its kind; the figures on rape in war are difficult to gather, and almost certainly drastically underreported. Ms. Jolie was asked why it had taken so long for people to begin to seriously study the issue of sexual violence in conflict, and she said: "I have no idea. I find it abhorrent and it makes absolutely no sense to me that we know that girls are being sold into sexual slavery; that when a woman is raped she is forced from her community; that girls as young as 9 are being married off. I cannot fathom why it has taken so long. I cannot fathom why it has ever been all right to treat women this way."

You can go online and watch videos Ms. Jolie made with Iraqi women in refugee camps: Amusha, whose daughter was kidnapped into slavery by members of Islamic State, and Sabreen, who was repeatedly tortured in front of her young sister Dilvian. It is not easy viewing, which is perhaps why so many prefer to look away.

How many women like Amusha and Sabreen are out there? How many Nigerian, Burmese, Ukrainian and Syrian women are the victims of targeted sexual violence, which is intended to terrorize a segment of the population? No one really knows, because if rape is underreported in stable Western countries, where support systems exist to help victims, imagine how few women come forward in war zones and refugee camps.

"Sometimes women are killed after they're raped, so we don't find about them," said Lauren Wolfe, director of the Women Under Siege project at the Women's Media Centre in New York. "Then you have the chaos of war, and you have people moving around, and on top of that you have the stigma that prevents women from coming forward."

Ms. Wolfe has been tracking sexualized violence in Syria for three years, listening to the stories of women in Jordanian refugee camps. The problem is "definitely underreported," she said in a phone interview. It's not just an issue of women being silenced by shame or stigma, but by official disregard and a lack of resources. "It comes down to a lack of money – you have to have the aid workers and support systems in place."

A 2011 study into sexual violence in the Democratic Republic of Congo, for example, found that the problem was grossly underestimated, and that 400,000 women were violated between 2006 and 2007. Women Under Siege is trying to quantify the number of sexual assaults in the Ukrainian conflict, but found that almost no investigation is happening, for a variety of cultural factors – including the fact that police and other officials strongly discourage women reporting rapes. As Women Under Siege's Antonina Vikhrest reported, "Advocates and survivors in regions across Ukraine repeatedly recounted how police often blame women for provoking the violence perpetrated against them."

One fact is clear and consistent, from Syria to Burma: Armies, whether state or rebel, use rape as a way of subjugating civilians, both male and female. Sometimes these acts of terror come to light, thanks to groups like Human Rights Watch, which reported last week on a mass attack by the Sudanese army in North Darfur in October. The men in the area were rounded up and segregated, and more than 200 women and girls were raped in a 36-hour period. That's not war, that's barbarism.

It's not as if the entire issue has been ignored. Last year, more than 150 countries signed the loftily titled Declaration of Commitment to End Sexual Violence in Conflict. Numerous United Nations resolutions have been passed to try to monitor and punish the perpetrators of war-zone sexual violence. But UN resolutions don't carry a whole lot of weight in a prison, a refugee camp or village under siege. As Secretary-General Ban Ki-moon wrote in his report on sexual violence last October, "The challenge lies at the implementation level."

You don't have to read bureaucratese to decipher that sentence: There's a hell of a lot of work to be done. 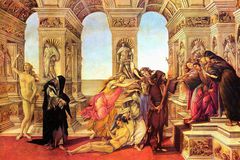