Even a flicker of democracy can ruin the best-laid authoritarian plans.

When Russian President Dmitri Medvedev and Prime Minister Vladimir Putin announced in September that they had privately decided to swap jobs with the presidential elections of March, 2012, they meant to reinforce a perception of the inevitability of a Putin victory and the invincibility of the ruling United Russia party.

With Mr. Putin at the top of the "power vertical" – the Russian system of rule – Mr. Medvedev was tasked with leading United Russia to a dominant parliamentary victory in this past weekend's elections for the State Duma.

Contrary to expectations, United Russia has not only failed to retain its constitutional majority – the two-thirds necessary for constitutional changes – but has been barely able to hold on to a simple majority. The Putin regime underestimated the deep and growing dissatisfaction of the population and the increasing power of cyber politics and the blogosphere. Bloggers, who have an audience of millions despite government attempts at controlling the media, labelled United Russia the "Party of Swindlers and Thieves," and the designation seems to have stuck.

Of course, the regime will remain in power and United Russia will be able, for instance, to add to its votes those of Vladimir Zhirinovsky's extremist Liberal Democratic party (which is neither liberal nor democratic) – a corrupt party that traditionally has been "for sale." Moreover, the State Duma is not really a key decision-making body and has been dubbed by critics the "Approval Ministry."

Nonetheless, this election is bad news for Mr. Putin and an indication of significant difficulties and instability to come in the future. There are several reasons for this.

First, political optics are particularly important in Russian politics. Mr. Putin has always promised stability, and this was based to a significant degree on his perceived invincibility and the power of deterrence that his rule, via the "power vertical" system, conveyed. There was a sense of inevitability to his policies, reinforced by the strength of both his personality and of the political machinery supporting him. Mr. Putin, therefore, looked to elections as in part a legitimizing ritual in a political order that – as it moved ever further away substantively from Mr. Medvedev's declarations of fealty to democracy – has come to occupy an increasingly thin border between limited democracy and full authoritarian rule. Yet, with the regime's invincibility now severely dented, critics and opponents will undoubtedly be emboldened in opposing government policies, challenging the pervasive corruption, and demanding a fairer distribution of incomes and resources at a time when Russia's one-dimensional, resource-driven economy, is confronting growing challenges.

Second, Mr. Medvedev's future itself has become cloudy. He had to deliver the votes during the parliamentary election if he was to be given the prime ministership. He had already lost whatever credibility he had with the electorate with the closed-door decision to switch the two top governing positions. Now, despite all of the administrative advantages that the ruling party had – where it could mobilize workers; control the television medium; use its judicial connections to fine Russia's leading independent vote monitor, Golos, for alleging electoral violations; employ other connections to mysteriously shut down communications broadcast from independent radio stations such as Ekho Moskvy, and blogging platforms such as LiveJournal; as well as the widespread, scathing allegations of thousands of violations of electoral rules by external and internal observers – United Russia still had a relatively poor showing. Mr. Putin has a history of not tolerating politicians who do not deliver as he expects.

Third, the election is also an indicator of a brewing legitimacy crisis in Russia. As the late Harvard scholar Samuel Huntington wrote, "performance legitimacy" plays a critical role in authoritarian regimes. When Mr. Putin was able to deliver growth and increasing public goods to the population, the legitimacy of his rule seemed solid because he reinforced it with an image of personal vigour and determination. Given Russia, however, is confronting massive structural problems due to its reliance on energy, with the vast Reserve Fund used to prop up the economy during the recession now largely depleted, and a demographic time bomb of extremely low birth rates, a shrinking population and a disintegrating health care system, not to mention an outflow of funds to Western safe havens, performance legitimacy is an increasingly less viable option within Mr. Putin's social contract that trades freedom for security.

Mr. Putin being booed at a recent sports event, for example, is therefore not just an anomaly because this election shows a major erosion of legitimacy, deep dissatisfaction and growing political uncertainty. All of this should worry the Putin government. But in these difficult economic and political times, they should be of concern to the entire international community.

Aurel Braun is a professor of international relations and political science at the University of Toronto. His latest book is NATO-Russia Relations in the Twenty-First Century.

Opinion
A chilly prospect for Vladimir Putin
May 3, 2018 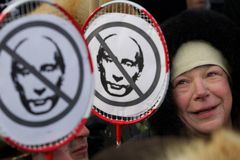