It increasingly seems that a second Clinton presidency will look a lot like the first one, a tenure stunted and besmirched by petty scandals of the couple's own making and a siege mentality that made them incapable of telling the truth even when it just made sense to come clean.

Time, it seems, has neither mellowed the Clintons nor made them any wiser. It has made them harder and more tribal, more defensive and secretive, not to mention, much richer.

Hillary Clinton's ongoing prevarication surrounding her use of a private e-mail account and server while she was secretary of state recall the Whitewater, Travelgate and Lincoln Bedroom scandals that plagued Bill Clinton's presidency. By endlessly stonewalling and shooting the messenger, the Clintons only made those scandals much worse. That pattern, it seems, has not changed.

Just as Whitewater (which started out as an investigation into a failed real estate venture) led to the Monica Lewinsky scandal, a congressional inquiry into Ms. Clinton's alleged failure to ensure security upgrades at the U.S. diplomatic compound in Benghazi, Libya, led to the revelation that she used a private e-mail server during her four-year tenure at the State Department.

The latter revelation has turned out to be much more damaging to the Democratic presidential nominee than Benghazigate ever was. Ms. Clinton can blame the "vast right-wing conspiracy" that launched the Benghazi hearings all she wants. Yet she has no one to blame but herself for acting in what the FBI called "an extremely careless" manner in using a private server vulnerable to hackers.

Try as she might, she certainly can't blame former secretary of state Colin Powell, whom she told the FBI had recommended the idea. As Mr. Powell quickly pointed out, she was using a private server for nearly a year before he told her in a 2009 e-mail that he had kept a private e-mail account while at the State Department. But he never set up his own server, and continued to use the department's more secure servers for transmitting sensitive information.

Before trying to pin the blame on Mr. Powell, Ms. Clinton said she used a personal account and server out of convenience, an excuse that never passed the sniff test. The ever-secretive Ms. Clinton simply wanted to shield her e-mails from the Freedom of Information requests that apply to government communications. Not only has she fallen spectacularly short of that goal, her obfuscation and martyr-syndrome theatrics have only made voters distrust and dislike her even more.

A year ago, Ms. Clinton insisted she went "above and beyond what was expected" in turning over 55,000 pages of her e-mail correspondence to the State Department. But the 30,000 supposedly private e-mails she refused to hand over continue to haunt her. Not only did the FBI determine that many of the surrendered e-mails contained classified information, potentially putting national security at risk, the agency has also discovered an additional 14,900 e-mails that Ms. Clinton failed to disclose. Their release could be this year's October surprise.

It seems likely that some of the private e-mails Ms. Clinton withheld deal with the affairs of the Bill, Hillary and Chelsea Clinton Foundation, the not-for-profit organization that has raked in more than $2-billion (U.S.) in donations, much of it from wealthy individuals, corporations and foreign governments. State Department e-mails belonging to Ms. Clinton's top aide there reveal regular correspondence between Huma Abedin and foundation executives seeking meetings with or favours from Ms. Clinton on behalf of foundation donors. Ms. Clinton insists she never took action as secretary of state because of donations to the Clinton Foundation, a claim that is as hard to disprove as it is to prove. At the very least, the e-mails show there was an implicit expectation among many foundation donors that coughing up cash would earn them privileged access to the secretary of state.

After all, the Clintons perfected the art of cash-for-access, once stooping so low as to offer a night in the White House's Lincoln Bedroom to the highest bidder. "Ready to start overnight stays right away," Bill Clinton wrote in a note to the Democratic Party's finance chairman as he sought to "energize" donors for his 1996 re-election. True to form, the Clintons stonewalled about releasing the names of their lucky guests, only making matters worse.

Their behaviour is the price to pay to keep the nuclear codes out of the hands of you-know-who.

Many donors to Clinton Foundation met with Hillary when she was Secretary of State
August 23, 2016 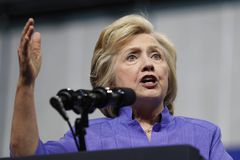 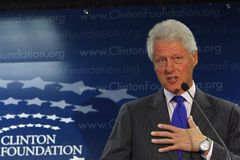