Senator Lynn Beyak is manna from heaven for Liberal strategists and their allies who seek to portray the Conservative Party as racist, sexist and homophobic.

To avoid being fatally branded as the weak-willed leader of such a party, Andrew Scheer must up his game, and soon. If he can't get across more forcefully who he is and what he believes, his political opponents will do it for him.

He has wasted seven months. The next election is less than two years away. Entrenching a positive political brand takes a great deal of time. Entrenching a negative one (such as the "just visiting" label the Tories slapped on Michael Ignatieff) can take almost no time at all. Time is not Mr. Scheer's friend.

In the dead of night, Thursday, the Conservative Party released a statement saying Ms. Beyak had been expelled from the caucus for posting racist comments from correspondents on her website.

The Conservatives had stripped the senator of roles and responsibilities, after she gave a speech in March, 2017, praising what she called the "abundance of good" that took place in residential schools.

The speech, however controversial, was not racist. But as is often the case, the senator took comfort in those who supported her, including some whose views were vile. For posting those views on her website, she earned her expulsion.

When it comes to disciplining MPs and senators, national party leaders are damned if they do/don't. They get castigated for prohibiting independent thought, and then condemned for permitting it.

Mr. Scheer could not reasonably have dispatched Ms. Beyak from caucus any sooner than he did, especially given that a national party leader exercises less control over senators than MPs. But that doesn't help him much politically. He is already struggling to reconcile his own personal opposition to abortion, and the opposition of some of his backbenchers, with his promise not to legislate on the issue.

He has received too little credit for his support of Prime Minister Justin Trudeau's apology for past mistreatment of homosexuals by the federal government. He also supported a party resolution in 2016 that dropped opposition to same-sex message. But critics focus instead on the fact he has never marched in a Pride parade. Of course, if he did, he'd be called a hypocrite. Sometimes you can't win for losing.

Accusations of intolerance, claims of homophobia, fears of the secret agenda on abortion rights were all levelled against Stephen Harper, too. "Bozo eruptions" by backbenchers played a role in his 2004 election defeat.

But Mr. Harper won in 2006, and governed for almost a decade. Why? Because people knew, right from the get-go, what he stood for. He was for low taxes, smaller government, stricter laws and a bigger voice for the West. These values defined him; they were marrow deep.

What does Andrew Scheer believe? We can't say. He has spent most of his adult life as a backbench MP or Speaker of the House. The day he won the leadership, he deleted his campaign platform from his website, which is never a good sign. The latest Nanos poll shows him to be the least popular national party leader, behind Mr. Trudeau and NDP Leader Jagmeet Singh.

One thing we do know is that Mr. Scheer objects to Mr. Trudeau's practice of appointing only independent senators based on merit. As prime minister, he would return to appointing partisan Conservatives.

Lynn Beyak. Don Meredith. Pierre-Hugues Boisvenu. Mike Duffy. Pamela Wallin. Patrick Brazeau. All of them were or are Conservative senators appointed by Mr. Harper who resigned or were ejected from caucus for misbehaviour. Mr. Scheer should reconsider.

More important, though, Andrew Scheer needs to define himself: his values, his priorities, his worldview. And he needs to make us believe that this is what he believes, that this is the core of him, not something cooked up with the help of focus groups.

Justin Trudeau has been making plenty of mistakes lately, from angering Asia-Pacific leaders over trade to taking meetings and vacations he shouldn't have. The NAFTA talks could collapse. He's not the high flyer he once was. 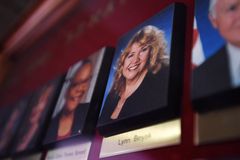 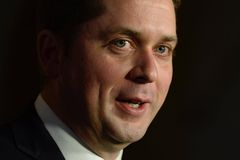