H.A. Hellyer, senior non-resident fellow at the Atlantic Council and the Royal United Services Institute, was deputy-convenor of the U.K. government's working group on tackling radicalization and extremism, after the bombings in July.

When The State was released on British television a month ago, there were those who decried it as a recruiting sergeant for the Islamic State. After all, the series does portray the four British Muslim citizens who travel to Syria as, well, human. So, obviously, the series must be a problem – for IS members cannot possibly be human. They must be insane, and their processes for becoming sympathetic to this veritable death cult cannot be familiar or recognizable in any way. Only that line of thinking is acceptable.

Except, that's not true – and it is why the series, which was recently released in North America, is actually quite important. At no point does it represent IS in a sympathetic, positive light. On the contrary, the group is presented as despicable, grotesque, and abhorrent. There is really no doubt that can be left in anyone's mind who watches the series. Yet, at the same time, the series seeks to present how people might actually be attracted to the group.

The sense of belonging, for example, that it purports to present – even though, as one can see in the series, that sense is ultimately a fraud. The desire to be a part of something larger than oneself – the defending of innocent people in Syria from a barbaric tyrant – which, again, is shown to be a fallacy.

But in the discussion around extremist Islamism, the discussion is often dominated by voices who do not want to see nuance. Nuance, it seems, is dangerous – because nuance, it appears, makes us go soft on extremists.

That's utter garbage, of course – because nuance and genuine insight allows us to understand why IS recruiters might succeed. And if we do not understand how they succeed, we stand a much smaller chance at understanding how to counter their recruitment strategies, and immunizing people from them.

That's not to say the series does not have its issues – it does. But those issues are less to do with the common complaints that have been thrown at it. The series was rigorously researched by the director and his team, particularly Ahmed Peerbux – and we saw the results through the way the worldview of extremist Islamism was presented on the screen for the audience. What we did not see, which is so deeply necessary, is how those characters on the screen led their lives prior to being successfully recruited.

If the series ever does come for a second season run, the writers should tackle what had happened to those characters that made them vulnerable to extremist recruitment. These are not aliens from outer space. Nor is it Islam that makes them into ticking time bombs. If the latter were true, then several million British Muslims would have already joined the radical group – an infinitely tiny proportion has done so.

Should the series tackle that prerecruitment phase, it's likely they are going to find that a plethora of factors play a role. Yes, there is an ideological component, which is rooted in a particular reading of purist Salafism – and not all readings, mind you – a reading that ought not to be underestimated. But it is not ideology that is always the strongest component: indeed, it is probably in a minority of cases where ideology is the deciding factor in the impetus of radicalization.

Of course, that's not the nuance that our public discussion around these issues is keen to hear. We want to hear that these young people are crazed nutcases; that the only thing that is important to understand is how evil the ideology is; and for a not-insignificant portion of the right wing and the left-wing parts of our political spectrum, that ideology is Islam, simply.

But while we may want to look for easy, black-and-white answers, life isn't really that simple. Indeed, life is complex – it's part of the urge to find such simplicity that allows some young people to be recruited in the U.K. by these depraved monsters. We will be able to disrupt their efforts far better when we realize and recognize that indeed, complexity is the name of the game.

Opinion
At the dawn of war, Syria’s youth had blind, unrelenting hope
September 3, 2017 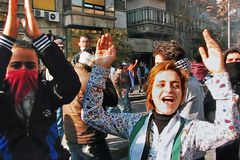