On a quiet London street, a tall man with blood-soaked hands speaks into a cellphone camera held by a random bystander. A crowd begins gathering behind him. In one hand, he holds a bloody meat cleaver. In the background, a half-dismembered body lies on the street. The victim is an off-duty British soldier, who leaves behind a wife and two-year-old child.

"We swear by the Almighty Allah we will never stop fighting you until you leave us alone. … We must fight them as they fight us, an eye for an eye, a tooth for a tooth," the man declaims.

This is how it looks when terrorism meets reality TV. The alleged assailant didn't even try to escape. Instead, he held forth to bystanders as he waited for the police to arrive. Then he charged the police car and the officers shot him and his accomplice, in the legs.

There are plenty of parallels between the cold-blooded murder of the British soldier and the Boston Marathon bombing last month. Both were carried out by unsophisticated perpetrators, who had no good plans to escape. They appear to have acted on their own, with no real outside help. They used unsophisticated weapons. (The Boston pressure cooker bombs were easy to make with the help of online manuals.)

The suspects in both attacks were known to security forces, but weren't thought to be important enough to be tracked. Both showed how easy it is to bring a nation to a halt.

These are terrorism's new breed: the self-radicalizers. They're often called the Nike terrorists, because they take their inspiration from Anwar al-Awlaki, the American-born al-Qaeda preacher who told them to "just do it." And that makes them awfully hard to stop.

"The nature of the new threat is often such attacks can come out of nowhere, with no network or obvious plot for MI5 or the police to pick up on in advance," wrote Tom Whitehead, the security editor of the Daily Telegraph.

The man with the bloody hands has been identified as a 28-year-old British-born convert to Islam named Michael Adebolajo. The son of devout Nigerian Christians, he was radicalized somewhere along the line. It's the usual story – not unlike the story of the older Chechen bomber in Boston, Tamerlan Tsarnaev. A loser latches on to a cause, adopts a grievance and, in the name of vengeance, decides to become a someone.

Angry, young disaffected men are everywhere. Women, too. In 2010, Roshonara Choudhry, a 21-year-old straight-A student, attacked a British MP named Stephen Timms and stabbed him in the abdomen. She told police she wanted to kill him because he'd voted for the war in Iraq. Like many modern radicals, she had no connections with Afghanistan or the Middle East; her parents were from Bangladesh. She had no direct contact with Islamic extremists, either. She'd been entirely self-radicalized by watching dozens of Anwar al-Awlaki's sermons on the Internet. "I was going to get revenge for the people of Iraq," she said.

Al-Awlaki was killed by the Americans in 2010. But his just-do-it message lives on, along with other online-fueled inspirations to jihad.

The bad news is that even a hyper-vigilant society will not be able to head off all the self-made jihadis in the world. The good news is that the terror networks have largely been disrupted. The main threat these days comes from the do-it-yourselfers. Only a few of those angry young jihadis will try to act, and fewer still will succeed, and when they do succeed they probably won't do much damage.

So why are we so prone to panic?

In Boston, the Americans shut down an entire city while they pursued the fugitives. I hope they don't make a habit of this. Mass hysteria just emboldens other would-be martyrs to unleash their own mayhem. Since 9/11, we've allowed ourselves to become far too infantilized by the threat of terror. In Britain, there are new calls to expand the security state by monitoring people's e-mail and Internet use. Societies that routinely deal with terror threats (such as Israel) are much more sensible. They do not shut down entire cities when bombs go off, or force hundreds of thousands of people to remove their shoes and discard their water bottles every day because of purely imaginary threats. When an attack happens, they efficiently scrape up the body parts and get on with life. (They also practise ruthless profiling.)

I would rather take my cue from Ingrid Loyau-Kennett, a 48-year-old Cub Scout leader who happened on the scene and confronted the knife-wielding man. She used the same matter-of-fact tone that works with angry children. "I thought I had better start talking to him before he starts attacking somebody else," she said. He threatened that no one in London would ever be safe, but she says she wasn't scared. "Better me than a child," she explained to an interviewer.

Then the police came, and then she jumped on a bus and went home.

Opinion
The voice of Britain’s Muslims will rise above the preachers of hate
May 24, 2013 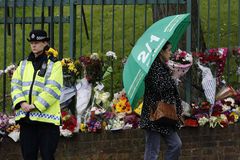 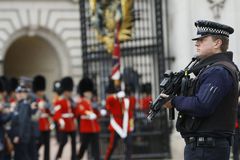 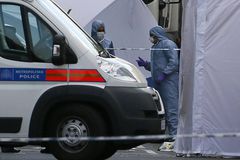