Derek H. Burney was Canada's ambassador to the U.S. from 1989-1993. He was directly involved in negotiating the Free Trade Agreement with the U.S.; Fen Osler Hampson is a distinguished fellow and director of Global Security at the Centre for International Governance Innovation and Chancellor's Professor (on leave) at Carleton University. They are the authors of Brave New Canada: Meeting the Challenge of a Changing World.

Just when the eye of the global storm seemed focused on violence erupting throughout the Middle East, the murderous missile assault on a Malaysian jetliner jolted attention back to Russia's incursion in Ukraine and a conflict that strikes at the core principles of security in Europe, including the inviolability of borders.

The attack on innocent civilians is a colossal blunder, one that has outraged the entire world and should prompt a firm response from the West, particularly from the Europeans. Russian President Vladimir Putin, like any schoolyard bully, will push against what he perceives as weakness until he is confronted and compelled to pull back.

Fingers of blame are pointed in all directions but the evidence strongly suggests that the plane was shot down by a surface-to-air missile launched either by the Russian-backed rebels holding the area where the attack took place or by the Russians themselves. It is important to note that both the political and military leaders of the 'rebel' group hail from Moscow. That international observers are being denied proper access to the crash site simply confirms the target of guilt. But it also provides room for them to fabricate a different verdict.

Mr. Putin's basic motives since his "smack and grab" seizure of Crimea is not only to destabilize Ukraine sufficiently to prevent it from moving closer to the West, but also to project Russian power throughout Eurasia and even into the Middle East, as we see in his continuing support for Syrian leader Bashir Assad and his meddling in Iraq. Thus far, his determination to project Russian power and influence is much stronger than the response of the West to contain his revanchist ambitions.

Mr. Putin is clearly thriving on the domestic support his takeover of Crimea and Russian separatist efforts in Eastern Ukraine have generated. Perversely, his actions flouting basic international norms have also inspired popular support for him in Europe and elsewhere where examples of "strong" leaders are in short supply.

What no-one really knows is how far Mr. Putin will go in pursuing his objectives and whether the West can now muster a more coherent and credible response.

Some believe that Mr. Putin will distinguish between those countries already solidly in the Western camp, especially those already in NATO, and those, like Ukraine, Moldova and Armenia, not yet formally committed. Others argue that there is no guarantee that Mr. Putin will show any more respect for NATO's Article 5 safeguards than he did for the inviolability of borders or the terms of the Budapest Accord – the pact that formally consigned Crimea to Ukraine in 1994.

Mr. Putin must draw some satisfaction from the fact that more than one-third of UN members, including all other BRICS countries, tacitly accepted Russia's illicit land grab. At least until now he has been winning the propaganda war. As Hillary Clinton acknowledged recently, Russian media messaging has been much more consistent and effective than the inchoate response from the West.

To date, the western powers have had no clear strategy on what to do to check Mr. Putin's "New Russia" dream. For one thing, the Europeans have been divided; some put more emphasis on economic self-interest vis-a-vis Russia, e.g., for energy supply, than to any concern about the sanctity of borders or even the security of those close to Russia.

But there are things that could and should be done to bolster Ukraine and to thwart broader military incursions. The downing of the Malaysian jetliner could prove to be a catalyst for collective resolve. Here's what must be done:

- A concerted EU/NATO economic assistance package for Ukraine would be a good start, one that would reinforce the credibility of the Poroshenko government and also reduce Ukraine's economic vulnerability to blackmail by Russia. Germany is best placed to lead this initiative;

- tangible civil society and advisory support to help Ukraine tackle endemic corruption and provide a broader base for the rule of law – a clear role for Canada;

- direct military supplies for Ukraine to balance what Russia is providing the pseudo-separatists; the U.S. has the capacity. The naval ships France wants to sell to Russia should be purchased by NATO;

- increased NATO military preparations and manoeuvers in and with former Soviet satellites that are now in NATO and safe-guarded under Article 5 to serve notice of an actual trip-wire. Led again by the U.S.;

- suspending landing rights for Russian airlines until a proper investigation is permitted and the responsibility for the missile attack is clearly assigned;

- the Europeans should take steps now to wean themselves off Russian gas supplies – the most effective leverage Mr. Putin has left;

- and, most importantly, an unequivocal ultimatum putting Russia on notice to cease and desist support for its puppet rebels in Eastern Ukraine or face the consequences of full, Level III sectoral sanctions that include energy and financial services. A credible threat of unified sanctions may have more value than sanctions themselves.

Total quarantine of Russia serves no strategic purpose. But, the West must show sufficient and calibrated resolve to knock Mr. Putin off his game before matters get completely out of hand. It is not a time for nuance. If this incident does not give the Western Europeans some backbone and inspire more assertive, U.S. leadership, nothing will. 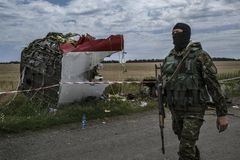 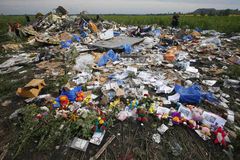