And soon the little monkeys will be, too.

Those who say the game cannot be tampered with, that there are already too many rule changes, fail to acknowledge how often, and how dramatically, hockey can change on its own.

Just consider the slap shot, Bobby Orr, Wayne Gretzky's back-of-net office, the butterfly style for goaltenders, the Detroit Red Wings' five-man units, the neutral-zone trap, and this: the spring of the blocked shot.

It hardly matters so much of the NHL game has become unbearable to watch, that there has been so little pure hair-raising excitement, that some of the stars under orders to drop in front of pucks or get off the ice haven't a clue how to do it right – the simple fact of the matter is it's working.

And nothing moves faster on ice than a successful trend.

Gregg Drinnan, the wise sports editor of the Kamloops Daily News who has been following the WHL for decades, says major-junior teams are already taking their lead, as usual, from the NHL.

The foam pucks are not new – minor-league teams sometimes use them in various drills that involve shutting off passing lanes – but the drills are. Youngsters are being shown how to face the shooter and half-kneel with one knee down, arms extended to the sides to make the blocker as big as possible. Players are also shown how to go down on their side and slide facing the shot, not twisting awkwardly as Washington Capitals star Alexander Ovechkin did this week to take a shot on his unprotected back.

Drinnan says the next step, obviously, is for junior teams to start wearing the plastic skate guards so many NHLers now use in the hopes of preventing broken ankles and feet.

And after that, surely, will be the inevitable filtering down of hockey's latest transformation to midget, bantam, pee wee … probably even some foolish house-league coach will demand his charges fall in front of pucks or face the consequences of the bench.

All this is of growing concern to many. Charles Tator, the leading expert on concussion and head trauma, is worried about junior hockey players who do not wear full cages to protect the face.

"Half-visors or no visors are dangerous for shot blocking," the doctor says. And though minor-league players are now mandated to wear neck protection, how much protection is adequate when it comes to the full blow of a slap shot?

"The neck," the expert says, "is at risk for everyone who shot blocks because of arterial and laryngeal trauma."

Remember Trent McCleary in 2000? The Montreal Canadiens forward went down to block a shot from Philadelphia Flyers defenceman Chris Therien and was hit directly in the throat. The puck fractured his larynx and the blood build-up causing his right lung to collapse. The injury was so devastating McCleary required an emergency tracheotomy – performed so quickly, doctors didn't even allow time for his skates to be removed – and he was placed on a respirator. The surgeon said it was "a matter of seconds" between life and death for the then-27-year-old, whose hockey career ended that night.

Today, McCleary is a successful investment adviser in Swift Current, Sask. He says he has not a single regret about the career that took him from the local Broncos (WHL) to stints with three NHL teams: Ottawa Senators, Boston Bruins and Montreal.

"I wish had more talent and I wish the puck didn't hit me perfectly that Saturday in 2000," he says, "but I had to play desperate my entire career, so I know exactly how they feel right now.

"Everyone is playing desperate and doing what they think is necessary for their team to win. Just look at who are still playing and the obstacles they have overcome. Ask anybody what they would do to help their team get to the next round? I bet you would get a lot of 'I'd do anything.'

"Some of these guys might never get the opportunity again to get this close to the Cup so they are going to do anything it takes to win. Fortunately or unfortunately, they don't even think of what could possibly go wrong or the potential adverse affects. They are so close they can taste it. I can sense the passion, the desire to win and blocking a shot at this time of the season is a small sacrifice compared to the potential championship ring on their finger."

There is no arguing there is admiration for those willing to sacrifice whatever it takes to win.

Equally, there can be no argument that whatever works in the NHL is immediately reflected by those who one day dream of playing or coaching in that league.

And given that monkey see, monkey do reality, some cause for concern about changes to the game that have nothing whatsoever to do with new rules.

"I'm not a doctor," Drinnan says, "but I do think that, sooner or later, a player is going to block a shot with his chest – and drop dead right on the spot." 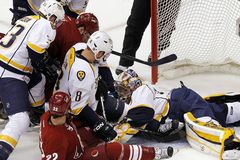 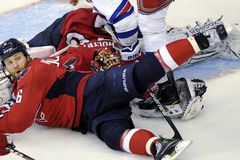