You may hate the current government, worry about the privacy incursions of intelligence agencies, have strong feelings about the failings of the health-care system and wish that schools did a better job.

But you still consider yourself part of human society. However miserable you may find it, you are inescapably caught up in civic life – and you have some sense of responsibility to your fellow participants in this collective endeavour. You'll take your car off the road or even double-park it, but you're not going to steer it into oncoming traffic.

And you assume that the people around you feel the same way: Good or bad, they're taking part in human society.

Then you get a slap in the face.

Slap No. 1 came with Canada's 2011 census. Not from the unfathomable decision by Stephen Harper's government to make it non-mandatory. There were worries that this would damage its accuracy: In 2006, 93.5 per cent of people had completed their long forms; a drop below 90 per cent could hurt its accuracy. But at least, we assumed, most people would come to the aid of their neighbours by filling in the new National Household Survey.

This was the slap: Only 68.6 per cent of Canadians given the new form bothered to put their crucial information on it. In other words, almost a third of us, when not legally forced to do so, declined to participate in a crucial act of citizenship. In many districts, more than half of people declined. As a result, the 2011 results are statistically useless. Everything from the labour productivity rate to which neighbourhoods are going to need new schools: We have no way of finding these things out.

Slap No. 2 comes with the measles outbreak. Three generations ago, after a great many Canadians had seen their children die of such diseases, we agreed that we'd all vaccinate our kids against them, thus creating a herd-immunity pool and rendering them obsolete.

And now they're back, in Canadian cities. We know that these outbreaks are happening because some people have refused to vaccinate. But we assumed that this must be a marginal group: The very religious, the profoundly libertarian, people so deprived or ignorant or deluded that they'd risk harming their children.

Then we started to see the numbers. It wasn't back-to-the-land types or destitute cat ladies driving this trend. Data released to the media by the Toronto District School Board, which tracks vaccination rates by school (and which won't let kids attend without proof of vaccination unless the parents apply for an official exemption), revealed that the schools where more than 10 per cent of students weren't vaccinated included many in very well-off neighbourhoods. The lowest vaccination rates – some below 50 per cent – were in small "alternative" schools popular among wealthy, elite, educated families. This is really bad. When the vaccination rate drops below around 90 per cent, herd immunity disappears and outbreaks can threaten even many vaccinated children.

It turns out that as with the census, the vaccination culprits are not the wild-eyed zealots who don't open their doors, but people you know. Your cousin who says she was worried by stories about vaccines causing harm, and didn't feel she should bother. The guy at the supermarket who says he just can't believe the medical establishment any more.

These are people who have made a calculated decision, based on their own interests and affinities, to not participate in society in a place where participation matters the most. A surprising number of people are rejecting not just the government of the day (which is fine), but any public official or institution (which is dubious) and any collective endeavour that may be organized by public officials (which is catastrophic).

These are not people who want the state abolished. They're not people who, like libertarians or fundamentalists, believe they're subject to a higher law, one that transcends human law and society. Those people will never be great in number, and even they often vaccinate.

They are what writer Garry Wills once characterized as "nullifiers" – people who reject important collective activities because they feel subject to a "lower" law – "a regional code that is deeper in people's lives than the law they break," a rejection of society that is not "heaven-piercing" but rather "ground-hugging." In this case, the ground-huggers are nonbelievers in medicine (as with vaccines) or those who put their privacy above any higher good (as with the census) – people, in short, who have turned away from any interest in larger human society, even if this non-interest can harm many others.

In the case of the census and vaccination, we need to make the voluntary mandatory again. But it will be far more important to rebuild pride in being part of the human project.

Could we stop the anti-vaxxers if we said measles contains gluten?
May 12, 2018

A look at some vaccine-related legislation being debated in several states
May 12, 2018 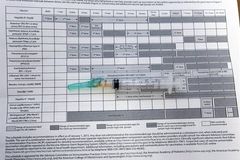 Opinion
Vaccine paranoia gives Jeb Bush a shot in the arm
May 12, 2018

In fight against vaccine mandates, skeptics find unexpected allies in conservative Republicans
May 12, 2018 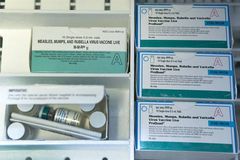