Is this the beginning of the end for Donald Trump?

Everybody's hoping so – especially the journalistic class. That's why they're so giddy over the defeat of Roy Moore, the Alabama swamp creature with the well-documented taste for teenage girls. This is not just a victory for simple human decency. It's also a taste of greater victories to come. "As goes Moore, so goes Trumpism," Ross Douthat's New York Times column predicted wishfully.

Here's how the wishful part goes. If the Democrats can win a Senate seat in the United States' most brutal, racist heart of darkness, then maybe they can take back the Senate and the House next year. And if they take back Congress, then Donald Trump and his odious gang of Republican enablers will be finished. One day, my children, we will look back on these crazy times and see that they were just a noxious fever dream.

I hate to be a party pooper. But I'm thinking not so fast. People have been predicting Mr. Trump's demise since the day he moved into the White House. And he's still here.

Mr. Moore wasn't just a flawed candidate. He was the worst candidate for senator in modern history – a knuckle-dragging troglodyte and a rogue judge who'd been kicked off the bench, twice. The Washington Post's devastating exposé of his amorous predations was the last straw. Even so, he lost by a mere 1.5 per cent. His miraculous defeat was attributed to a coalition of women, millennials, and black voters – the Democratic Party base. Black women voted against him by 98 per cent.

"Roy was right. God was in control," tweeted the British author J.K. Rowling. "What he didn't realize was, She's black."

But cosmic justice wasn't really what defeated Roy Moore. It was the conscience of ordinary Republicans, as expressed by Alabama's other deeply conservative senator, Richard Shelby. "I think Alabama deserves better," he told CNN. His decision to repudiate Mr. Moore (and defy the Republican Party establishment) was highly influential.

Many if not most conservatives were elated by the result. Reflecting popular sentiment, the headline in The New York Post read: Perv Moore Loses.

Alabama's business community also has a healthy sense of self-preservation. They're desperate to rebrand their state as modern and forward-looking. As one lawyer told The Washington Post, "We want to be attractive to the smartest people in the country." That combination of moral revulsion and a deep desire to improve their state's miserable image explains why more than 22,000 people – mostly Republicans – showed up at the polls to cast write-in votes for candidates other than Mr. Moore. That pretty much equals the margin of victory for his opponent.

Alabamans, in other words, were voting against Mr. Moore, not Mr. Trump. And unless the Republicans field a bunch of absolutely terrible candidates next year, it's unlikely that masses of red counties will suddenly turn blue.

Still, hope springs eternal. Perhaps the Russia investigation will bring him down. As conspiracy theorists tell it, Mr. Trump's secret and long-standing ties with Russia resulted in massive collusion between the Russians and his campaign to throw the election. Now that special counsel Robert Mueller has indicted Mr. Trump's former national security adviser Michael Flynn, it's only a matter of time before the canaries begin to sing.

Unfortunately, no normal person can possibly keep track of who is being investigated by whom, and for what. So far none of it seems to amount to much. Frankly, it's hard to see Mr. Trump (or Donald Trump Jr., for that matter) as a mastermind capable of directing such a convoluted, evil scheme. In any event, the idea that Mr. Trump could be impeached is just a fantasy. It would require evidence of criminal wrongdoing so strong that his own base would abandon him and his own party would vote against him. Dream on, kids. Mr. Trump's Republican support is still running at 82 per cent.

Here's another problem. The economy is on a roll. The stock market keeps setting records. The unemployment rate has plunged to 4.1 per cent. How much does Mr. Trump have to do with all this good fortune? It doesn't matter. As Bret Stephens wrote in The New York Times, the wealth effect usually beats the yuck factor.

The danger of the Democrats' victory in Alabama is that they'll take all the wrong lessons from it. They'll keep believing they don't need the white-guy vote to win. They'll keep deluding themselves that they can ignore the elemental forces that propelled Mr. Trump into power. They'll keep dismissing the economic and cultural concerns of Trump voters as racist, ignorant and backward. And they will ignore the possibility that contemporary conservatism, with all its authoritarian impulses, has a good long way to run.

If I were in a betting mood, I'd guess that the greatest threat to Mr. Trump for the next few years will not come from the Democrats, or from the Russia probe. It will come from his own incompetence in office, combined with an appetite for Big Macs that's downright life-threatening. And even if the junk food does Mr. Trump in, Trumpism will be alive and well.

Globe editorial: After Alabama, Donald Trump is a liability for his party
December 13, 2017 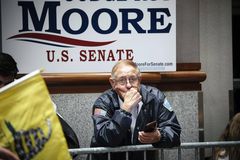 Opinion
One year in, Trump is on the outs with America
December 14, 2017 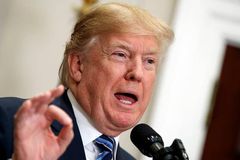